Escot House is a grand country house in the Escot Estate in the parish of Talaton, near Ottery St Mary in eastern Devon. The house built in 1837 for Sir John Kennaway (3rd Baronet) to the design of Henry Roberts, to replace an earlier house built in about 1680 by Sir Walter Yonge (1653–1731) of Great House in the parish of Colyton. This Stuart-age house was built to the design of Robert Hooke, and burned down in 1808.[1]

Today the house remains the home of the Kennaway baronets.[2] It is used as a wedding and conference venue,. Wildwood Escot, a family attraction, is next door within the grounds of Escot estate.

The house itself is is a Grade II listed building.[3]

The estate or manor of Escot is not listed in the Domesday Book of 1086.[4] The earliest holder]] of the estate was the de Escote family which, as was usual, took its surname from the estate. The Elizabethan / early Stuart Devon historian William Pole states that it "hath taken his name from the situacion", presumably meaning that it was a cott (mediæval farmstead) on the east side of the manor of Talaton.[5] In 1249 it is recorded that the estate was occupied by the widow Domina Lucia de Escote (Lady Lucy de Escote), who was succeeded by her son Baldwyn de Lestre.[6]

The estate later passed to the family of Beauchamp of Ryme in Dorset, a junior branch of the Beauchamp feudal barons of Hatch Beauchamp in Somerset. After the death of Thomas Beauchamp in 1349 without children, the estate was divided between the descendants of his two sisters, but both parts were purchased by Richard Chanon in the sixteenth century, to whose heirs it passed for another hundred years. 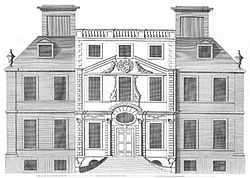 Escot House, as built circa 1684 - illustration in Vitruvius Britannicus

This was a brick house of rectangular form, about ninety feet by eighty feet,[9] the façade of which is recorded in a detailed drawing published in the 1715 edition of Vitruvius Britannicus. Pevsner deemed this building "much more interesting"[1] than the surviving replacement.

The Rev. John Swete visited the house in 1794 during one of his Picturesque Tours and arrived one or two weeks before the estate was about to be sold at auction, when marquees had been set up on the front lawn to house the crowds of prospective buyers. It had been advertised for several months in various newspapers. The seller was Sir George Yonge, 5th Baronet (1731–1812), grandson of the builder. Swete remarked in his Travel Journal: "From the sight of the tents I assumed a notion that Sir George with some of his friends was come once more to greet the Lares of his ancestors".[10]

From the road which ran through a very wide avenue of oaks which were at so great a distance from one another as to exhibit the noblest specimens of this tree the Glory of the Forest, in all their beauty and luxuriance, the house was beheld to considerable advantage, seated on a gently rising slope just beyond a piece of water, which being of an oval figure detracted in a most glaring manner from the beauty whuch the scenery would otherwise have possess'd...The walls are formed of brick with freestone mouldings and a variety of ornaments...a light and not inelegant air pervades the whole, which united with its many rural beauties, gave me much pleasure and excited my admiration".[11]

As a connoisseur of landscaping, Swete mused on what improvements might have been made by "Mr Brown" (Capability Brown) to the park, and made a watercolour of the scene (see at right), now in the Devon Record Office.

Shortly after Swete's visit, as he recorded in his Journal, the estate was purchased for the sum of £26,000 by Sir John Kennaway, Baronet (1758–1836), a returning Nabob (like his contemporary Sir Robert Palk, 1st Baronet (1717–1798) of Haldon House). He was from Exeter and had made a fortune in the East Indies[12] where he served as British Resident at the Court of the Nizam of Hyderabad.

The house was destroyed by fire in 1808, which occurred while the Kennaway family was away,[13] resulting in almost total destruction of the structure and furnishings.[14] One notable survival rescued from the fire was the prized portrait of Lord Cornwallis, Governor-General and commander-in-chief in India, presented to the first Baronet when he left India. Although Sir John was a director of a local fire insurance company, his own house was uninsured as he had not yet signed the documents for his own policy. His is said to have told the unfortunate young female house-guest who caused the fire by drying her clothing too close to the fireplace in her bedroom: "My dear, I forgive you, but I never wish to see you again".[15] The author William Makepiece Thackeray was an acquaintantance of the 1st Baronet and his children, and in 1852, long after his death, he used his memories of former visits to Escot in writing his novel Pendennis. The protagonist "Major Pendennis" was based on the 1st Baronet, and features of the house and grounds appear in the book, thinly disguised. Thus the nearby town of Ottery St Mary he called "Clavering" and Escot itself became "Clavering Park"; the oval pond in front of the house became "Carp Pond", the River Tale the "Brawl".[16]

The present house was built in 1838 by Sir John Kennaway, 2nd Baronet (1797–1873) (whose father had died two years earlier in 1836), to the design of Henry Roberts. The new house was built on the same site, but the ground-floor was raised on higher foundations and a terrace was created to the south and west. The principal entrance was moved to the east side, looking across the parkland. On the north side the hillside was cut back to create various service buildings.[17] It is built of Flemish bond brick and appears yellow on the forward aspects but red to the rear and service buildings. The roof is of slate, with limestone ashlar chimney stacks.[3]

The building has two stories with basement and cellars, and is constructed on a square plan, being two rooms wide and two rooms deep. The entrance on the east side gives onto a hallway containing the main staircase. The house has multi-pane sash windows with limestone architraves. The building was Grade II listed in 1988.[3] In 1844, Sir John built bridges over the River Tale flowing through the estate, and erected several miles of fencing in the park. He took a great interest in gardening and in 1858 started to plant azaleas and rhododendrons.[18] In 1860 part of the northern edge of the park was lost when used for the track of the new Exeter to Yeovil railway.[17] In 1858, Sir John built a glass-sided aquarium, made possibly by advances in the manufacture of strong glass.

John-Michael Kennaway (born 1962), son and heir apparent of the 5th Baronet, has been running the estate since January 1984, and took over formally from his father in 1987. He attended Hampshire College of Agriculture[19] and is an expert in aquaculture, though he and his wife discontinued the aquaculture business and in 1989 and filled in the fish ponds in the walled garden, which became a Victorian rose garden. They have opened however an ornamental fish business (Escot Aquatic Centre) in the disused linhay of Home Farm. The gardens were opened to the paying public.

Escot has faced many setbacks in latter years including:[17]

Otters and wild boar were introduced to the estate and boosted visitor numbers to 4,500 in 1990. A successful new water garden design and construction business was established, trading as "Gentlemen Prefer Ponds".[17] In 1993 the "Coach House Restaurant" was established. The house itself is now hired out for a variety of events, including a Policeman's Ball, wedding receptions from 1994, Civil Marriage ceremonies from 1996, conferences, etc. Parts of the upper floors are let as flats. In 2002 the estate hosted "Beautiful Days", a new music and arts festival comprising a mix of music, art and crafts, which received 15,000 visitors. From 2007 various pop concerts have been held in the grounds.[17]

Escot Park, the surrounding 220-acre park designed by Capability Brown in the 18th century, and the gardens, are open to the public. Escot Park is used for events including the annual "Beautiful Days" music festival and occasional other outdoor music and theatre performances.[20]