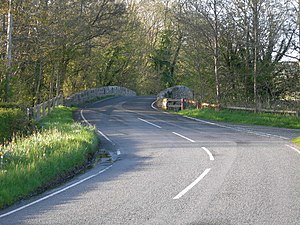 Llandre Bridge across the Eastern Cleddau into Pembrokeshire

Egremont is an ancient parish in the very west of Carmarthenshire, adjacent to the border with Pembrokeshire. It forms the most westerly point of the county and projects into neighbouring Pembrokeshire such that it is surrounded on three sides by that county. To the west lies Llandissilio East in Carmarthenshire; to the south, Llawhaden; to the north-west, Bletherston; and to the north-east, Llandissilio West. There are also short boundaries with Llanycefn and Grondre; all in Pembrokeshire.

The main railway line from London to the ports of Milford Haven and Fishguard passes through Egremont, with the nearest station being at Clynderwen, two miles to the east. The railway bridge over the Eastern Cleddau is a two-span double-track viaduct built in 1851-52 to the designs of Isambard Kingdom Brunel.

The parish church of St Michael was ruinous by 1895. A sixth-century inscribed stone, the Carantucus stone, was formerly built into the outer west wall of the church. The stone was first identified in the churchyard in 1745, and was built into the church's west wall by 1889. It is now built into the aisle of St Tyssilio’s Church, Llandyssilio West.

Llandre Egremont farmhouse is an 18th-century three-storey farm house. There is a panel of arms, possibly of the Prothero family, dated 1788.

This Carmarthenshire article is a stub: help to improve Wikishire by building it up.
Retrieved from "https://wikishire.co.uk/w/index.php?title=Egremont,_Carmarthenshire&oldid=45508"
Categories: