Edinbane is a small village on the northern coast of the isle of Skye, Inverness-shire.

Edinbane lies on the A850 road[1] at the foot of the Waternish Peninsula of Skye, 14 miles from Portree and 8 miles from Dunvegan. The name An t-Aodann Bàn is said to be taken from the white bog cotton plants that can be found on the hill sides. The village is based around the crofts with a small primary school, a pottery and two hotels, the Edinbane Hotel and the Lodge Hotel.

There has been a settlement here since before 1600, but it was Kenneth MacLeod of Greshornish (1 December 1809, died unmarried in 1869) who founded the village.[2]

Kenneth McLeod's family had farmed land in the Gesto area of Skye for over 500 years. At the age of 15 he went to India, with his fare paid out and one golden guinea in his pocket, given him by Mrs MacDonald of Waternish. After a year's work, he took the river boat down to Calcutta. On the way he went ashore and visited a place where an auction of the contents of a sugar factory was in progress. With his precious Guinea, he bought a copper boiler, which he sold in Calcutta for £30. He now returned to the derelict sugar factory and bought it for very little. This set him on the ladder to making a fortune in India planting indigo. 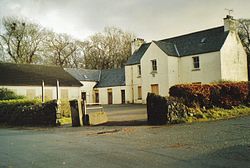 Returning to Skye, he endeavoured to buy the tack of Gesto but MacLeod of MacLeod was not prepared to sell. Kenneth then bought Orbost, Edinbane, Skirinish, Greshornishy, Tote and Skeabost and much of Portree. He ensured that the village had a tradesman from each of the important crafts. He set up the first hospital on Skye in Edinbane, aptly named Gesto. It is now boarded up.[3]

The Lodge is claimed to be the oldest coaching inn on the Isle of Skye, dating from circa 1543.[4] It was built by Kenneth as a hunting lodge. Gesto, with the Lodge, was the first place on the Isle of Skye to have electricity, which came from a hydro scheme in the Abhainn Choishleadar behind the Lodge. The hotel is supposed to be haunted by various ghosts.

The Lodge was used as the land court for the surrounding area, where people were tried for sheep rustling and more serious crimes. If found guilty and sentenced to death, they were hanged in the gardens of the hotel.