Easky or Easkey is a village and parish in County Sligo. It is on the Atlantic coast, 26 miles from Sligo and 15 miles from Ballina. The village name derives from the Irish language term for fish ("iasc") and "Iascaigh" literally means "abounding in fish", due to the Easky River that lies adjacent to the village itself. Easky, as a parish, was originally called "Imleach Iseal". The area is a popular tourist destination due to its scenery and water sport options. Easky is a designated area on Ireland's Wild Atlantic Way tourist route. 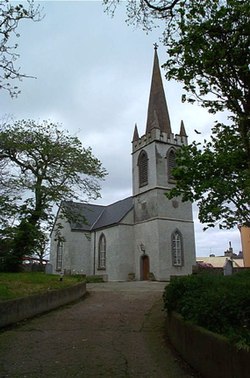 The parish of Easky is part of the barony of Tireragh. Tireragh is a corruption of Tír Fhíacrach Múaidhe in Irish, meaning "the land of Fiachra of the Moy". This tuath was founded by the Uí Fiachrach Muaidhe, who were, themselves, a branch of the Uí Fiachrach dynasty of Connachta.

Easky was originally named "Imleach Iseal/Isil" which means the "low imleach", or "low land verging on the water". The first settlements in the area seem to have taken residence in Castletown, a townland that exists to the west of the present-day village. Geologists have become increasingly interested in the rugged coastline around Easky, as it holds fossil structures that date back for millions of years.

In John O'Donovan's textbook The Genealogies, Tribes and Customs of Hy-Fiachrach, commonly called O'Dowd's Country, it is documented that a man called Maoldubh, a son of Fiachra Ealgach (the son of King Daithi), was born and bred in Easky and established a fort in the area called "Dun Maoilduibh".

In O'Donovan's book, Easky is also mentioned through the following reference: "To Iasca, of the land of the white-blossomed apple-trees, Belongs the O'Mailduns of high renown." This is a reference to a powerful clan known – in modern parlance – as the O'Muldoons, a surname that is virtually non-existent in the area today. They held the "mansion seat" in Castletown and were defenders of the area at large.

In Samuel Lewis's 1837 publication of A Topographical Dictionary of Ireland, Easky is described in the following words:

EASKEY, a parish, in the barony of TYRERAGH, county of SLIGO, and province of CONNAUGHT, 11½ miles (N. N. E.) from Ballina, on the old road to Sligo; containing 6124 inhabitants, of which number, 289 are in the village. This parish is situated on the north-west coast, between the entrances to the bays of Sligo and Killala; it includes the Point of Kinesharrow, called also Rathlee Point, and comprises 12,977 statute acres, principally under an improving system of tillage; there is a large quantity of bog. Limestone, which abounds with fossils, is found on the sea shore: much seaweed is collected for manure. The village consists of one long street of 76 houses, and has petty sessions once a fortnight, a market on Wednesday for provisions, fairs on 3 June and 18 November, and is a chief constabulary police station; fairs are also held at Rosslee in July, and on 28 October. (...) The glebe-house, on a glebe of nine acres, was built by a gift of £300, and a loan of £500 from the late Board of First Fruits, in 1815. The church is a neat building with a square tower, erected by aid of a loan of £1342, from the same Board; the Ecclesiastical Commissioners have recently granted £130 for its repair. The R. C. parish is co-extensive with that of the Established Church, and contains a chapel. Here is also a place of worship for Baptists. About 600 children are educated in five public schools; and at Killenduff is a school supported by Col. Irwin, who built the school-house, and endowed it with three acres of land. In the village are the ruins of the old parish church; and there are considerable remains of the old castle of Rosslee, formerly belonging to the O'Dowds, and, on the opposite side of the river, the remains of another, on the lands of Castletown. There are several Danish forts, and on the lands of Townamodagh is a cromlech, seven feet high, and supported by four square pillars. The shores of the parish are bold and rocky, and abound with curiosities. At Alternan is a station, holy well, and saint's bed, named after St. Ernanus, and much frequented by pilgrims; the patron is held on the last Sunday in July. Near Fortland is a chalybeate spring.

Built in 1207, the castle became home to the O'Dowd chieftains of Tireragh (the barony of much of West Sligo). The castle was originally built for Oliver McDonnell who came to the area to marry an O'Dowd widow. A dominant landmark in West Sligo, the castle is beside Easky pier. Much of the original structure of the castle has been lost over time, yet the main body of the castle remains. 63 feet high, the highest part is known as the "Sailor's Bed".

Outside the village, in the townland of Kileenduff lies the Ice Age boulder known locally as the "Split Rock". Local legend holds that the rock was split as a result of an argument between two giants on the Slieve Gamph mountains (Ox Mountains), one of whom was Fionn MacCumhaill. It is said that the rock will close if one walks through the rock three times.

The centre of the village is dominated by the structure of the Old Abbey and graveyard which dates back to Mediæval times. The graveyard contains many uniquely designed tombstones, and remained in use until 1888.

To the east of the village, in the townland of Aderavoher, is the location of Easkey's main cemetery, Roslea Cemetery. It was opened in 1888. An extension to the south of the existing cemetery took place in 2005. A permanent altar/grotto has also been constructed at the far end of the "new" cemetery. An information sign on all those buried in named plots is located just inside the main gate of the cemetery.

The bridge provides access to the main village from the Sligo side of the area. It was built in 1847 after the old bridge was washed away in a storm in 1844. It contains the Bullance stone, which is built into the bridge wall and is a symbolic drinking trough, which qualified the village to hold a "Fair Day". The water is reputedly a cure for skin infections. Hangings took place at the bridge in the 19th century. A similar type bridge is located south of the village in the local woods. This is known as "Fortland Bridge".

In the townland of Aderavoher, opposite the local vocational school, is the location of Easky Courthouse. It came into existence during the Irish Famine and is one of Easky's most historical buildings. At the start of the 20th century, the County Sligo court held its sessions here. The building was attacked during the Irish Civil War. In 2010, the Courts Service of Ireland announced that Easky Courthouse would no longer hold its monthly sessions.

The parish of Easky, including the townlands of Rathlee, Killeenduff and Owenbeg are littered with numerous forts and mounts which date back to ancient times.

Surfing is a popular attraction in Easky. The village is known for its surfing areas, including two reef breaks.

In 1995 the Irish Surfing Association established its headquarters in the Easky Surf and Information Centre on Main Street. The building, now known as "Easkey House" is located in the centre of Easky village.

The popularity of Easky as a surfing hot-spot was highlighted on the RTÉ travel programme 'No Frontiers,' in the episode broadcast on 31 January 2010.

The Easky River is a popular river for kayaking and canoeing. In 2003, Easky hosted the World Surf Kayaking Championships.

The Easky River is an attractive river for fishing of salmon, grilse and trout. The river rises in Lough Easkey in the Ox Mountains and moves through bogland and various terrains before flowing past the village. Most of the best fishing spots are owned and managed by the Fortland Fishery, but significant stretches of the river are open to the public.

There are several walking routes around the river estuary and coastline (with views of the Slieve League and Benbulbin mountains) and through the local woods in the townland of Fortland.

The writer Jack Harte was born in the Easky townland of Killeenduff, where his father was the local blacksmith.

The sculptor Fred Conlon was born and grew up in Killeenduff, Easky.

The village itself has a popular café, Pudding Row, restaurant The Grub Hub, take-away, two pubs, two shops, gift-shop, a butcher, a hairdresser, a post-office, a pottery shop, St James's Roman Catholic church (which dates back to 1833) and St Anne's Church of Ireland (which dates back to 1820), a community centre with caravan and camping area and a History and Genealogy Centre.

To the east of the village is the local vocational school, Coláiste Iascaigh. The parish of Easky has three primary schools situated in the townlands of Rathlee, Killeenduff and Owenbeg. Another primary school is located in Easky village but has been closed since 2003. A creche now operates in this building.

The parish holds a tradition in Gaelic football with Easky G.A.A. club being founded in 1888, just four years after the formation of the Gaelic Athletic Association. They were amongst the first teams to compete in the first Sligo Senior Football Championship of 1888, playing St John's in Collooney on 11 March 1888.

Reeling in the Years

Easky G.A.A. was the focus of a segment of the popular RTÉ series Reeling in the Years. In the 1986 episode, it was highlighted that the club had lost 15 players (a full team) due to emigration to Britain and the United States.