Dyce is a parish in Aberdeenshire that forms a suburb of the city of Aberdeen, about six miles north-west of Aberdeen city centre, and best known as the location of the city's airport. It is on the River Don.

Dyce is the site of an early mediæval church dedicated to the 8th century missionary and bishop St Fergus, otherwise associated with Glamis, Angus. Today the cemetery, north of the airport, and overlooking the River Don, hosts the roofless but otherwise virtually complete former St Fergus Chapel, within which Pictish and early Christian stones from the 7th–9th centuries, found in or around the churchyard, are displayed (Historic Scotland; open at all times without entrance charge).

The Chapel is a unicameral late-mediæval building with alterations perhaps of the 17th or 18th centuries. Two further carved stones, of uncertain (though probably early) character, were discovered reused as building rubble in the inner east gable and outer south wall during the chapel's restoration. They were left in situ and are readily visible. A broken font, somewhat resembling a round-backed chair in its present condition, lies outside the church, and may also be of early mediæval date.

The graveyard surrounding the old church was used into the 20th century, and retains almost no old gravestones. There is a small 'mort house' in one corner of the enclosure, which is adjoined by a modern extension, still in use for burials. 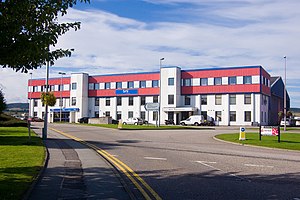 British Midland Regional Airways has its corporate head office at Aberdeen Airport East in Dyce.[1] Halliburton has an office in Dyce.[2]

Dyce railway station is served by local and long-distance trains on the Aberdeen to Inverness Line.

There is an old railway line running from Dyce northwards past Newmachar which is now a path for pedestrians and cyclists.

Dyce (Aberdeen) Amateur Swimming Club (Est 1977), which runs its own Swim School for those wishing to learn to swim, is based at the Dyce Academy swimming pool. The Club and Swim School are both affiliated to the Scottish Amateur Swimming Association to help swimmers compete up to North District and Scottish National Level.