Glamis (pronounced ˈɡlɑːmz) is a small village in Angus, to be found four miles south of Kirriemuir and five miles southwest of Forfar. The name of Glamis is world-famous for its appearance in Shakespeare's Macbeth, and also it is the location of Glamis Castle, the childhood home of Queen Elizabeth the Queen Mother. 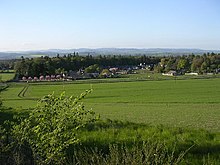 Glamis, with the Grampians beyond

The vicinity of Glamis has prehistoric traces - within the village there stands an intricately carved Pictish stone known as the Glamis Manse Stone. There are various other Pictish stones nearby the village, such as the Hunter Hill Stone, and the Eassie Stone, which stands in the nearby village of Eassie.[1] In 1034, King Malcolm II was murdered at Glamis.[2]

Glamis is a well preserved conservation village. The parish church, dedicated to St Fergus, was founded in the early mediæval period (probably the 8th century AD). The present building is 18th-century with restoration in the 1930s but retains a vaulted 15th-century aisle from the mediæval church which preceded it.

In the tragedy play Macbeth by William Shakespeare, Macbeth is Thane of Glamis. In the first Act, Macbeth is introduced as Thane of Glamis, and is soon elevated to become Thane of Cawdor also, the former holder having been executed for treason. He learns of his new title through the witches' prophecy, and later commits regicide to fulfill the third line of the address by the weird sisters:

The Forfar Bridie, a meat pastry snack popular with locals and visitors, is believed to have originated here, rather than in the nearby county town of Forfar.