Duleek is a town in Meath. It takes its name from the Irish word "daimh liag", meaning 'house of stone' or 'church'.

Duleek began as an early Christian monastic settlement. St Patrick established a bishopric here about AD 450, which he placed in the care of St Cianan on 24 November 489. The place was sacked several times by the Norsemen between 830 and 1149 and was also pillaged by the Normans in 1171. In April 1014 the bodies of Brian Ború and his son lay in state in Duleek on their way to Armagh. The original monastery settlement is reputed to be the place where St Patrick and several contemporaries spent the winter period while compiling the Seanchas Mór - the first written compiled form of the ancient Brehon Laws of Ireland in the fifth century. The 12th century saw the reconstitution of the original monastery as St Mary's Abbey.

The first Anglo-Norman Lord of Meath, Hugh de Lacy, established a manor and constructed a motte castle at Duleek. About 1180 he granted St Cianan's Church, together with certain lands, to the Augustinians. The churchyard of the now disused Church of Ireland church occupies part of the site of the early monastery.On the opposite side of the village in the town land of Abbeyland close to the river Nanny and Duleek house there are ruins of the Grange of St Michael. This grange was established in about 1172 by Augustinian monks from Llanthony in Monmouthshire; the lands were granted to them by the De Lacy family. The village’s four crosses and the lime tree on the village green are reminders of Duleek’s links to the struggle between William and James and to wider European unrest at the time of Louis XIV of France. One of the crosses, the Wayward Cross, was however erected in 1601 by Janet Dowdall in memory of her husband, Sir William Bathe of Athcarne Castle outside the town.[1] During World War II, or The Emergency, German bombers accidentally struck the village on 1 January 1941; minor damage was caused and there were no casualties. 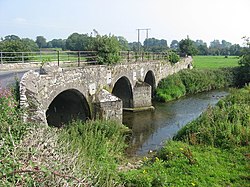 Duleek railway station was opened on 1 August 1850, as part of the line from Drogheda to Navan (and later to Oldcastle). It closed on 1 June 1958.[2] Zinc ore trains from Tara Mines to Dublin Port continue to pass through the station.

Duleek is served by four Bus Éireann routes. The 103 provides several daily journeys to/from Dublin via Ashbourne and Finglas. Route 189 and 189A provide several daily journeys to/from Drogheda and Ashbourne with route 189 journeys continuing to Clogherhead.The 189 has been recently replaced by the 105 which now runs from Drogheda to Blanchardstown.[3] Expressway route 70 provides a Sunday-only link to Mullingar and Athlone during college terms. The main bus stop in Duleek is at The Green in the centre. Route 188 which provided a service every two hours to Slane, Navan and Trim was withdrawn in November 2013.[4][5][6][7] The village is also serviced by a number of college bus routes. Bus routes run to Maynooth University and to Dundalk Institute of Technology[8][9]