Stretch of the river at Twickenham

The Duke of Northumberland's River is a man-made river in south-western Middlesex. It consists of two sections of artificial waterway. The older name: "Isleworth Mill Stream", or "Isleworth Mill River", more accurately describes the economic motivation for their construction. 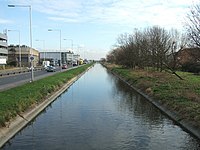 The river near Heathrow Airport

The western section was constructed during the reign of King Henry VIII to augment the flow supplying existing mills and to supply new mills, which became a source of revenue for the Duke of Northumberland's estate.

In 1530[1] an old record lists an increase, probably temporary, of 42 labourers who were working on a new river cut from Longford, Middlesex (probably the Duke of Northumberland's River).

This western section diverts water from the River Colne at Longford, flowing eastwards to the River Crane. For a large part of its early course, it flows alongside its younger "twin", the Longford River.

The section past the hamlet of Heath Row was diverted south in 1944 when Heathrow Airport was built.[2] Both rivers have recently been diverted as part of the Heathrow Terminal 5 "Twin Rivers Diversion Scheme". They skirt the western and southern perimeter of Heathrow Airport then separate at The Two Bridges in Bedfont, southeast of Terminal 4.[3]

The Duke of Northumberland's River then flows east to join the Crane in Donkey Wood, by Baber Bridge, west of Hounslow Heath.

The eastern section diverts water from the River Crane in Kneller Park Whitton, north-eastwards past The Stoop and Twickenham Stadium, through Isleworth, originally to the Mill then onwards to supply the ornamental ponds in the Duke of Northumberland's estate at Syon Park. Sluices control the flow into the park and the Thames.

This eastern section is the older of the two, built in the time of Syon Abbey and before the Duke of Northumberland bought the river with the Syon estate from King James I around 1605.