Dorsey or Dorsy is a small, scattered village and townland between Belleeks and Cullyhanna on the edge of the Ring of Gullion in southern County Armagh. It has an estimated population of 130-160 people and includes about 30-35 houses.

The name of the place is from the Irish Na Doirse, meaning 'The gateways'.[1] This refers to the extensive Iron Age earthwork, known as the Dorsey Ramparts, running through the area. 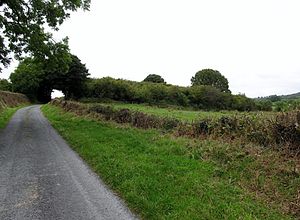 The Dorsey Ramparts ar an extensive earthwork which runs through the South Armagh area. They were known in Irish as Na Doirse, meaning 'the gateways', giving a name to the townland. Locally the ramparts are known as 'the Walls'.

are said to have been a fortified frontier post to the kingdom whose capital was Emain Macha (Navan Fort), blocking an important historic route into South Armagh. It was built at a time when the power of the Ulster kingdom may have been at its strongest, around 100 BCE. Some time later Ulster was threatened from the south and it is speculated that Dorsey may have been incorporated into a more extensive defensive system known in Monaghan and further west as the Black Pig's Dyke.

Dorsey is one of the few monuments in Ulster which have been confirmed as Iron Age in date. It is a group of linear earthworks with a perimeter of two and a half miles, enclosing an area of 300 acres.

The chapel in Dorsey is over 50 years old and was built by local people. The site on which the chapel was built was donated by a local, Felix Mackin.