Devil's Bridge is a village in Cardiganshire, up in the Cambrian Mountains.

The outstanding feature of the village is a stack of three bridges, one on top of the other, and it is from these that the village takes its name. The Welsh name is more sedate: Pontarfynach means "Bridge on the Monk", though the monk in question is the River Mynach ("mynach" meaning "monk"), which river tumbles down a gorge here.

The three bridges span the River Mynach, a tributary of the Rheidol. They all cross the gorge in the same place, coexistent, each one built upon the previous bridge.

The original bridge, now buried at the bottom of the pile, was built between 1075 and 1200.

The bridges are at a point where the River Mynach plunges down the Mynach Falls, dropping 300 feet in 5 steps[1] down a steep and narrow ravine before it meets the River Rheidol. The set of stone steps leading down to the lowest bridge at the waterfall are known as Jacob's Ladder.

According to the legend the original bridge was built by the Devil, as it was too difficult for mortals to build. The agreement stipulated that the Devil would build the bridge in return for the soul of the first living thing to cross the bridge. The Devil built the bridge but was tricked by an old woman who threw bread onto the bridge. Her dog crossed the bridge for the bread, thus becoming the first life to cross the new bridge. 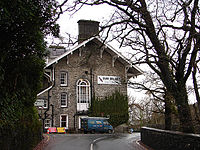 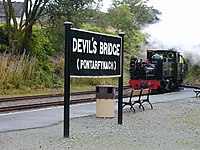 Devil's Bridge has been a tourist attraction for centuries. The celebrated roving author George Borrow wrote Wild Wales (1854), which includes a lively, humorous account of his visit to Pontarfynach. The George Borrow Hotel, a 17th-century inn where Borrow reputedly stayed during his visit, is located nearby.

The area was once part of the Hafod Estate owned by Thomas Johnes. Johnes built a small hunting lodge on the estate which, after several expansions and upgrades, is now operated as the Hafod Hotel.

Devil's Bridge featured prominently in the opening two episodes of the 2013 Welsh-language crime noir, Y Gwyll, shown on S4C and subsequently on BBC4 (as 'Hinterland').