From Wikishire
(Redirected from Denver, Norfolk)
Jump to: navigation, search

Denver is a village and parish in Norfolk. It is located on the River Great Ouse, a mile south of the small town of Downham Market, 14 miles south of the larger town of King's Lynn, and 37 miles west of the city of Norwich.[1][2] 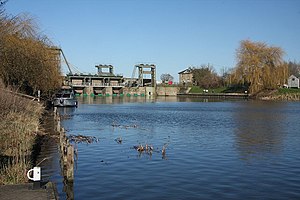 In 1651 the first sluice was built across the river at Denver, by Cornelius Vermuyden, although it had to be rebuilt after bursting in 1713. The sluices play a major role in the drainage of the fens, being at the confluence of five watercourses. The area is now enjoyed by many tourists, and Denver Sluice is the home of West Norfolk Rowing Club and Denver Sailing Club.

Denver is home to a fully restored 19th-century windmill, and lies on the path of the Roman Fen Causeway. Captain George Manby, the inventor, was born in the village in 1765, and a plaque commemorating this can be found at his birthplace.

Its name came from Anglo-Saxon Dena fær = "the ford or passage of the Danes", referring to Viking invasions.

The fictional place Duke's Denver, the family seat of the Duke of Denver, brother of Lord Peter Wimsey in the novels of Dorothy L. Sayers, is also in Norfolk, but it is supposed to be situated several miles to the east of Denver village.

This Norfolk article is a stub: help to improve Wikishire by building it up.
Retrieved from "https://wikishire.co.uk/w/index.php?title=Denver&oldid=31859"
Categories: