Delabole is a large village in northern Cornwall, some two miles west of Camelford.

The village came into existence in the early 20th century but its name is of far older origin. The newly planted village was named after the Delabole Quarry and sits across the lands which in the early nineteenth century are shown on maps as four hamlets: Pengelly, Meadrose (pronounced "médroze") and Rockhead, and Delabole, south of the quarry. When the railway arrived, the station was named 'Delabole' after the quarry, and the three hamlets were absorbed into Delabole.

Delabole is said to be the third highest village in Cornwall.[1] Treligga military airfield and HMS Vulture II, an aerial bombing and gunnery range, were situated west of the village.

Delabole lies within the Cornwall Area of Outstanding Natural Beauty, as is almost a third of the whole county.

The name Delabole derives from the Cornish language, as do the names of the hamlets of Pengelly and Medrose which comprise today's village. Delabole comes from the Cornish Delyowboll. The name "delyow" is the historic name for a local stream, and the word boll could come from two places. It could be a soft-mutation of the Cornish word poll (pool), however, it could be an incorrect mutation of toll (hole), which should mutate to doll.

Therefore, the meaning could be extracted as 'pool on the delyow stream' or 'pit by the delyow stream'. As the name originally designated the quarry, either name would make sense, given the collection of water at the bottom of the quarry or the crater created.

The names Pengelly and Medrose also come from the Cornish language. The original Cornish name of Pengelly is Penn-an-gelli. This construction uses the base words penn (head or end) and kelli (grove), with a soft mutation of the initial consonant. Therefore, the name is 'End of the Grove'.

The name Medrose is also a descriptive name coming from medhros meaning 'middle of the heath'.

The local names "Deli" (SX079840), "Delinuth" and "Delamere" are also related to "delyow" which has the meaning "place of leaves" according to Craig Weatherhill. Delinuth and Delamere mean "new Deli" and "great Deli" respectively.[2]

The manor of Delabole (Deliou) was recorded in the Domesday Book (1086) when it was held by Roger from Robert, Count of Mortain. There was one hide of land and land for 4 ploughs. There were 1 plough, 1 serf, 1 villein, 3 smallholders, 1 acre of meadow, 40 acres of pasture, 5 cattle and 25 sheep. The value of the manor was 10 shillings though it had formerly been worth 30 shillings.[3]

Delabole was the birthplace of the Cornwall Air Ambulance. Businesses include Delabole Quarry and Delabole wind farm, the first commercial wind farm in the UK.[4] The Gaia Energy Centre opened on the wind farm site in 2001 as a tourist attraction. It cost £5m and was intended to attract 150,000 visitors a year. It closed after three years of opening when it only achieved one tenth of the required visitor numbers. Most of the funding for the centre came from Europe, with £300,000 grants from Objective One and SWDRA, the South West Regional Development Agency.[5] 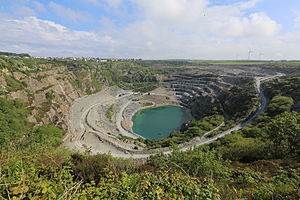 The Delabole Quarry is a slate quarry and one of the largest of its type in Britain. It has been operated continuously from the 15th century making it the oldest working slate quarry. In the reign of Elizabeth I the five quarries on the site of the now larger pit assumed considerable importance delivering slate to Brittany and the Netherlands. In 1841 the five quarries were combined to make the Old Delabole Slate Quarry.

The Old Delabole Slate Quarry Ltd was liquidation|liquidated in 1977 by the company's bankers. It was run under receivership by Rio Tinto Zinc until 1999 when a local management team bought it out. In 2005, the majority shareholders bought out the entire share capital, creating a single family ownership, the first time since 1842.[6] In 1910, 500 people were employed at the quarry but this has since been reduced to 80, the decline due to the availability of cheaper roofing materials e.g. Welsh slate or prefabricated tiles.

Delabole Quarry was once the deepest man-made pit in the world, but this is no longer the case due to massive open cast mines and quarries in America and Australia.

The quarry was connected to a narrow gauge railway worked by steam and diesel locomotives to move the slate: this is thought to have begun before 1834 and continued in use until after 1987.[7][8] The North Cornwall Railway provided a freight service from Delabole between 1893 and 1964 (passenger services ended in 1966). 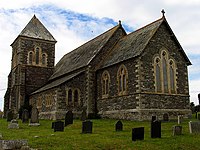 The parish church is St John's. It was built around 1880 to the design of the architects Hine & Odgers. The church actually stands though in St Teath.

The Methodist Chapel is about 20 years older and has a curious 'Italianate' porch.[9] 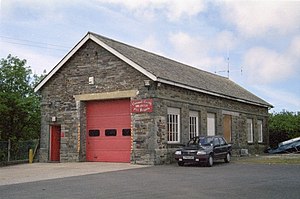 Delabole is renowned for its annual carnival, one of the biggest in Cornwall. It was revived in 2001 after a break of nearly forty years. The week of events takes place in July each year.

The village has a King George V Playing Field and until the 1950s there was also a cinema: the Regal.[10]