Darlaston is a town in Staffordshire, within the Black Country and as with its neighbouring towns, Darlaston was caught up and remade by the Industrial Revolution.

The origins of the town are now very obscure due to intense coal mining during the 18th and 19th centuries that destroyed any archaeological evidence of Darlaston's past. The de Darlaston family owned Darlaston and lived in the manor between the 12th century and 15th century. When the de Darlaston family died out, the manor was taken over by the Hayes family and renamed Great Croft. The exact location of the manor is not known. It is believed that the site is covered by the new Asda car park, slightly south west of the original parish church, which is now the location for St Lawrence's Church.[1]

Due to being located on the South Staffordshire Coalfield, Darlaston became industrialised very early in its history. The first industries were cottage industries and anyone wishing to mine the coal had to apply for a copyhold from the lord of the manor. In 1698, Timothy Woodhouse was manager of the coal mines belonging to Mrs Mary Offley, who was the lady of the manor. In the first year he sold 3,000 sacks of coal and later went into partnership in his own business. Darlaston also had a windmill which is mentioned in a map of 1695. The mill continued to be in use until about 1860.[2]

The town grew in the 19th century around the nut, bolt and gun lock manufacturing and coal mining industries. It was highly industrialised with a population of 6,000 in 1841. Large areas of land were owned by the Birmingham Coal Company and the area was accessed by the Birmingham Canal Navigations and Grand Junction Railway.[3]

In December 1839, the rector of the parish reported that there were approximately 1,500 homes in the parish of Darlaston, most of which were in poor condition and owned by working-class people. The Rose family were identified as a wealthy family in the area during the 19th century as a result of Richard Rose's acquisitions of unenclosed land. Upon his death in 1870, his estate was valued at over £877. He bequeathed the land to his wife Hannah. His brother was identified as James Rose in an 1871 census and was listed as a latch, bolt and nut maker, employing 39 people, including 19 children. At the time of the 1881 census, James Rose was 55 and his business had expanded to employ 90 people.[4] James Rose died in 1901.[5] Construction of Darlaston Town Hall commenced on June 21, 1887 and it was completed in 1888.[6]

Darlaston was subject to bombing raids in Second World War. One such bombing raid targeted the Guest Keen & Nettlefolds' Atlas works on July 31, 1942 and completely destroyed All Saints Church. It was the only church in the Diocese of Lichfield to be destroyed by enemy action. A newly built church reopened in 1952.[7]

A Luftwaffe bombing on 5 June 1941 wrecked several houses in Lowe Avenue, Rough Hay, and killed 11 people. The bomb had been aimed at Rubery Owen's factory but missed by some distance.[8]

By the end of the 1980s, most of the industry in the town had closed and the town is now considered a ghost town, with an increasing high level of unemployment.

Many Victorian terraced houses were demolished during the second half of the 20th century, and the council built thousands of houses and flats to replace them with. 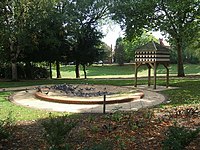 Bentley Old Hall stood in the north of Darlaston until the early 20th century. Its grounds were redeveloped as a housing estate in the 1950s.

Mining subsidence, which has taken its toll on many buildings across the Midlands, has also made its mark in Darlaston. In 1999, a council house on the New Moxley housing estate collapsed down a disused mineshaft while its occupants were on holiday. The adjoining house also had to be knocked down. Since then, the council owned housing stock in Darlaston has broken away from Walsall Metropolitan Borough Council and is now controlled by Darlaston Housing Trust. In 2001, two of the town's four multi-storey blocks of flats were demolished, and the remaining two where demolished 2004. Local elderly residents were deprived of their car parking facilities in Wesleys fold because of the demolition due to an oversight by Walsall council. Some of the town's council owned low rise homes have already been flattened by bulldozers, mostly because of subsidence, while many more are expected to be cleared.

Since the early 1970s, the town centre has been by-passed by St Lawrence's Way, which runs between The Green and Bull Stake.

In 2011, a total of 15 derelict sites in the town were designated as enterprise zones, offering tax breaks and relaxed planning laws to any businesses interested in setting up bases in the selected areas. It is expected to create thousands of jobs in the town by 2015 and ease the town's long running unemployment crisis, which has deepened since 2008 as a result of the recession.[9]