Daresbury is a little village in the north of Cheshire, which at the 2001 census had a population of just 216. Notwithstanding tis size, the village is a major centre for research and innovation, housing the growing Daresbury Science and Innovation Campus, centred on Daresbury Laboratory run by the Science and Technology Facilities Council, which operates the Synchrotron Radiation Source here.

The village is to be found to the east of Runcorn, separated by a broad, green cordon from the townscape, and south-west of Warrington, which sits across the Mersey in Lancashire. The Bridgewater Canal passes the west side of the village, and the M56 motorway courses through to the south.

Daresbury was the birthplace of Lewis Carroll, author of Alice's Adventures in Wonderland, and the village has a Lewis Carroll Visitor Centre.

The parish church is All Saints' Church. It has a Lewis Carroll window, including an image of the Cheshire Cat.[1] 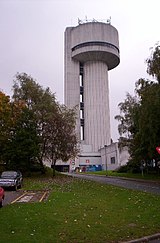 The Tower at Daresbury Laboratory

The laboratory has a portfolio of research and facilities, including:

The wider Science and Innovation Campus hosts a number of technology companies and is being expanded.

Daresbury Hall is a Georgian country house in Daresbury, built in 1759 for George Heron. It became a military hospital during the Second World War, and later a nursing home. The house later returned to private ownership, but the death of the owner has left it abandoned and awaiting restoration or redevelopment.