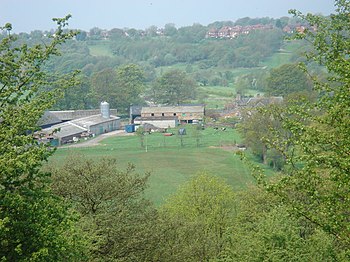 Cuerdale is an area of Ribblesdale, and a civil parish, in Lancashire. It is a place on the south bank of the River Ribble just upstream of Preston at SD5729. There are no villages here, but farms and the manor house, Cuerdale Hall. It is a place famous for the Cuerdale Hoard, a treasure of Viking silver dug up here in the nineteenth century.

Cuerdale was once a township in the parish of Blackburn, becoming a separate civil parish in 1866. Its name in origin is believed to be "Cynferth's dale", after an Anglo-Saxon personal name.

It has been speculated that Cuerdale was part of an ancient Norse route from Dublin to York; the Norse would bring their ships up the Ribble and moor at Cuerdale, from which they might proceed overland across the Pennines.

One of the earliest known references to the area was Warine or Swain de Keuerdale born abt 1112 (who may be the same person as Swain De Salmesbury, Lord Of Hindley) and occupied site on or near location of present Cuerdale Hall. When Warine died, Gilbert received half of the Manor. The rest was divided between the other sons.[1] The rest of the estate was divided between the other sons.[2]

Cromwell's army encamped in the area before the Battle of Preston in 1648.

Examination of satellite images showing field alignments and local roads suggest that Cuerdale Hall was on the Western side of a road coming from the south that possibly crossed the Ribble immediately north of the hall. The last mile approximately of this road does not exist today. Sections of the road exist perhaps a mile south of the hall. The alignment of the hall does not correspond to modern roads or modern alignment of the river Ribble. The hall alignment suggests that this road may have passed from Cuerdale Hall through Cuerdale Cross the location of an ancient stone cross, which could mark the position of the ancient village of Keverdale.

The remains of defensive ditches on the site of Cuerdale Hall were surveyed in the early 1990s. The hall is contained within a semi-rectangular area about 500 feet in extent formed by a deep ditch about 40 feet in width. There is a V shaped ditch about 23 feet wide and six feet deep on the southern side of the Hall. Parallel and a little further south there is a scarp which suggests that the 23-foot ditch may have been cut from an earlier and wider ditch that silted up. The evidence suggests that a fortified enclosure existed on the site that was large for a manorial enclosure in the area. Close to a ford in the River Ribble the site is of strategic significance. The fortifications have not been dated. Some moated enclosures around halls in Lancashire served a decorative rather than protective purpose. 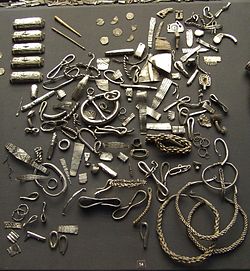 The Cuerdale Hoard was found in the parish; the largest Viking Age silver hoard known from north-western Europe. The hoard was buried, at best estimate, about AD 905. Others estimates place it at any time between 902-910. In any event there are no coins dated to later than 905, and so it cannot have been buried in the invasion or flight from Brunanburh.

The hoard is a treasure of over 8,500 objects buried in a lead-lined chest; it consists of silver coins, together with ingots, amulets, chains, rings and cut-up brooches and armlets (hacksilver). Five bone pins were recorded, which may have originally fastened cloth bags containing the silver, but these have not survived.

Most of the coins were minted in Northumbria, then under Norse rule. Some are of English, Continental and Arabic origin, indicating the extensive trading and political links the Nordic peoples enjoyed at the time. Much of the other material is typically Irish or Hiberno-Norse in form and decoration.

As well as some puzzling Norse or Danish coins, the Hoard contains some 1,800 silver coins minted in memory of the St Eadmund, King of the East Angles, who was killed by the Danes in 870 AD, about 850 coins of King Alfred, and fifty of his son and successor, Edward the Elder. There were also just over a thousand coins of European origin, mostly Frankish from mints in Touraine, and a few from further east, including Kufic, or Arabic, and Byzantine coins.

There are various theories about the origin of the Cuerdale Hoard.

The main theory is that the hoard was buried by the men of Dublin after the Norse were expelled from Dublin in 902. It might however have been a war-chest ready to pay for a reconquest of Dublin. Either way, it was never reclaimed. Dublin was eventually reconquered by Sihtric (Sigtryggr) in 917.

Such a great weight of silver, almost forty kilos, was probably the collected wealth of many persons, rather than one individual. Silver formed the basis of currency in the Viking Age and it was often buried in times of unrest. The latest coins enable us to establish quite accurately when the Cuerdale hoard was buried.

In 1966 Mr M Banks (Numismatic Gazette, December 1966) suggested that the treasure may have been intended to support the English churches in the Danelaw, where they were in serious financial difficulties as a result of the Viking occupation. He also suggested that as so many of the coins were apparently minted in France, they were probably a contribution from Frankish churchmen to their less fortunate co religionists in beleaguered England. Quite how this squares with the undoubted Norse origin of most of the Hoard is hard to say.

The Hoard has no connection with the Battle of Brunanburh. However it might suggest a solution to often asked the question "Where was Brunanburh?". Cuerdale lies at the beginning of an overland route to Viking York. There appears to have been a ford to the north bank of the Ribble. The Ribble itself is a highway deep into the Pennines, and close to the ford is the course of a Roman Road from Preston to Ribchester and up into the Pennines. If this was a common route from Dublin to York, it might well be where Olaf's army came in 937, marching eastward into the mountains, and may suggest the theory long held in Blackburn that the battle took place by the banks of the River Brun, which runs from the hills to Blackburn.

From the earth to the museum

The hoard was found by workmen in the bank of the River Ribble in 1840. They immediately began to fill their pockets with the silver coins. On the arrival of the bailiff, they were ordered to empty their pockets, but he did allow them to keep one piece each.

The Hoard was declared "treasure trove" at an inquest, and its ownership thus vested in the Duchy of Lancaster. The Duchy gave it to the British Museum, where it remain.

There had long been a legend in the area about "the richest treasure in England", long thought to be a folk-myth.