Crossgar is a village and townland in County Down, found about 15 miles south of Belfast, between Saintfield and Downpatrick. Crossgar had a population of some 1,872 people according to a 2008 estimate.

The name "Crossgar" is from the Irish an Chrois Ghearr, meaning "The short cross".[1]

The parish of Kilmore comes from the Irish Cill Mhór meaning "big church" or another possible meaning is An Choill Mhór meaning "the big forest", which suggests that the area was covered by a large forest. Another location of one of the seven chapels is the townland of Killinchy (Cill Duinsí) meaning "Duinseach's Church".

Crossgar has had an interesting and varied past, from the settlement of Anglo-Norman invaders, to Scots settlers, to the St Patrick's Day riots in the 1800s. According to a history of the Roman Catholic diocese of Down and Connor, the parish of Kilmore, in which Crossgar lies, was likely to have been established around the year 800 and was the ecclesiastical centre of this part of County Down. It was thought that the area had seven chapels and these can be reasonably evident by the remains of burial grounds. But the seventh cannot be traced to a burial ground and is referred to as the "lost chapel of Cill Glaise". O'Laverty says that by tradition this chapel was built by St Patrick and left in the care of his disciples Glasicus and Liberius.[2]

Also situated in the same grounds is a huge Victorian conservatory with vines that were planted as far back as the last century.

Tobar Mhuire Retreat and Conference Centre is run by the resident Passionist community, with 15 guest rooms, several conference rooms, and 60 acres of grounds. The centre is in a former manor house, known as Crossgar House, bought from Colonel Llewellyn Palmer by the Passionists in 1950 to house their Juniorate, a second-level school for boys interested in Passionist religious life and priesthood. 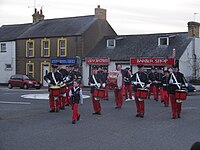 Crossgar is on the main A7 road, 5 miles north of Downpatrick and 16 miles south of Belfast, and on the B7 minor road between Ballynahinch and Killyleagh.

Crossgar railway station opened on 23 March 1859, but finally closed on 16 January 1950.[4] Part of the track, from Downpatrick to Inch Abbey are operated by the Downpatrick & County Down Railway, a heritage railway.