Compton Bishop is a small village and ancient parish at the western end of the Mendip Hills in the Winterstoke hundred of Somerset. It is located close to the historic town of Axbridge. Along with the village of Cross and the hamlets of Rackley and Webbington it forms the civil parish of Compton Bishop and Cross.

It was listed in the Domesday Book of 1086 as Comtone. It was the property of Giso, Bishop of Wells.[2] The current manor house is a Grade-II listed building and was built in the early 17th century.[3]

The parish includes the hamlet of Rackley which was a trading port on the River Axe in the Middle Ages following construction of a wharf in 1200. It now north of the River Axe as the course has been diverted, but on the Cheddar Yeo near the confluence. In 1324 Edward II confirmed it as a borough; however, by the end of the 14th century the port was in decline.[4] In the 14th century a French ship sailed up the river and by 1388 Thomas Tanner from Wells used Rackley to export cloth and corn to Portugal, and received iron and salt in exchange. Later slate was imported through this route and it may have still be possible to trade through Rackley until the act of 1915 authorising the drainage of the Axe and installation of the flood gate at Bleadon.[5]

Also within the parish is the small village of Cross, where Wavering Down House was, for the last 20 years of his life, the home of the British comedian Frankie Howerd.[6] The house is now a tourist attraction, and in the summer hosts concerts and opens regularly as a museum of Howerd's collection of memorabilia to raise fund for charities.[6]

The name 'Webbington' is believed to mean 'The weaving enclosure' from the Old English webbian and tun.[2] Webbington is popular with hikers as it has many good footpaths leading up to Crook Peak and Shute Shelve, at the western edge of the Mendip Hills, and is part of the Wessex walk route leading from Weston-super-Mare to Wells. The Webbington Hotel[7] dominates the hamlet and is the only commercial building in the immediate area. 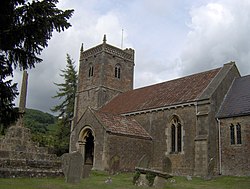 The Church of England parish church of St Andrew dates from the 13th century, being consecrated by Bishop Jocelin in 1236, with more recent restoration. It has a 15th-century pulpit with tracery panels, carved friezes and cresting. Above the pulpit is a large pedimented wall monument to John Prowse who died in 1688, as well as several of his children.[8] It is a Grade-I listed building.[9][10] The churchyard cross is Grade-II listed,[11] as are two chest tombs in the churchyard.[12][13]