Colwall is a large village in Herefordshire, on the west side of the Malvern Hills, which form a dramatic border with Worcestershire to the east. The village nestles on the western side of the hills, at the heart of the 'Malvern Hills Area of Outstanding Natural Beauty'.[1]

Areas of the village are known as Colwall Stone, Upper Colwall which shares a common border at the Wyche Cutting with the Malvern suburb of Malvern Wells, and Colwall Green, spread along two miles of the B4218 road, with the historic village core (at the parish church) being a miles to the west of Colwall Stone.

A feature of Colwall is the view of the Iron Age hillfort known as British Camp (on the Herefordshire Beacon), which largely falls within the south-east corner of the parish. The towns of Ledbury (Herefordshire) and Great Malvern (Worcestershire) are five miles south-west and three miles north-east respectively from Colwall Stone, by the B4218. 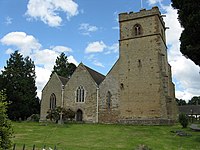 The village has several churches, most notably the Church of England parish church of St James the Great. St James stands in the small mediæval core to the west of Colwall Stone.

The village is served by Colwall Station, a single platform railway station between Great Malvern and Ledbury stations, on the line which passes through the Colwall Tunnels: the first of these tunnels was dug under the Malvern Hills between 1856 and 1860: this tunnel was closed in the 1920s when it was in danger of collapse, but served the nation during the Second World War when used as a torpedo store; it is now a roost for a colony of lesser horseshoe bats.[4] Near to the station is the mock Tudor country house style Colwall Park Hotel, purpose built in 1905 to serve the now defunct Colwall Park Racecourse.

The village has a state primary school (Church of England), and two independent preparatory schools, The Downs, Malvern College Prep. and The Elms, founded in 1614.

There is also a large, modern village hall on Mill Lane between Colwall Stone and Colwall Green,[5] which incorporates the Church of England's St Crispin's Chapel.

Colwall Stone has numerous local shops and service businesses, including a convenience store, a small fruit & veg shop, a butcher's shop, a pharmacy, an estate agent, a hairdressers and a specialist garden centre. There is also a library, a doctors' surgery[6] and a post office. In Upper Colwall, near The Wyche Cutting, is the Malvern Hills GeoCentre,[7] located in the Wyche Innovation Centre (occupying the former Skot Transformers building) along with a cafe and many small businesses.[8]

There are four public houses in the parish — the Chase Inn in Upper Colwall, the Crown in Colwall Stone, the Yew Tree in Colwall Green, and the Wellington Inn in Chance's Pitch. Additionally there is the Colwall Park Hotel and Thai Rama in Colwall Stone and the Malvern Hills Hotel at the southern end of Jubilee Drive, near the British Camp.[9]

Malvern water has formed a part of the national heritage and culture since Queen Elizabeth I made a point of drinking it in public in the 16th century, and Queen Victoria refused to travel without it.[11] It was mentioned in 1622 in Bannister's Breviary of the Eyes:[12]

The water was first bottled on a commercial scale in 1851 and sold as Malvern Soda and then as Malvern Seltzer Water from 1856. In 1890, Schweppes entered into a contract with a Colwall family, and built a bottling plant in 1892. The actual source of the spring is on the western side of the hills, in Herefordshire. The factory is now owned by Coca-Cola & Schweppes Beverages[13] and employs 25 people who bottle 12 million litres annually.

The purity of the natural spring water from thr hills produced a quoip famous locally:

The Malvern water says Dr John Wall is famous for containing just nothing at all"...!

On 21 October 2010, Coca-Cola announced that Malvern Water would cease production and the Colwall plant would be sold off to property developers. Malvern Water was priced out of the market, with a market share of just 1%.

Legend has it that the Colwall Stone (which gave its name to the settlement of Colwall Stone that has grown around it) was rolled down from the Malvern Hills by a giant whose footprint can be seen to this day on the slopes of the British Camp. The stone was replaced at some point; it took a horse and cart to take the old one away.[15]