Cold Ashton is a village in the Pucklechurch Hundred of Gloucestershire. It is located five miles north of Bath in Somerset, near the junction between the A46 and A420 roads. The village church has a 14th-century tower and the rest of the church was rebuilt in the 16th century by Thomas Key, its rector.[1] It had a population of 221 according to the 2011 census.[2]

In the 1870s, Cold Ashton was described as

A parish in Chipping-Sodbury district, Gloucester; on the verge of the county, under the Cotswolds, 5¾ miles N of Bath r. station. It includes the village of Pennsylvania; and its Post Town is Marshfield under Chippenham. Acres, 2,300.[3]

Now, Cold Ashton is described as

A small village which, due to its setting, exhibits an air of tranquillity and pleasant isolation. The stone-walled main street together with the close alignment of the manor house, the Old Rectory and the courthouse, give the village an intimate character.[4] 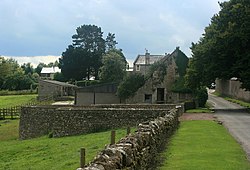 Hyde's Lane, part of the Cotswold Way
, The village also has a shop within walking distance, at the garage in Pennsylvania.

Originally the property of Bath Abbey, Cold Ashton then became entirely owned by William Pepwall, Mayor of Bristol, following the Dissolution of the Monasteries in 1564. Following this acquisition, buildings such as the Elizabethan Manor House containing Renaissance style features, the Old Rectory and the Holy Trinity Church were constructed. It is debated who had this influence, however, with dating referring more-so to the later Mayor of Bristol John Gunning.[5]

Looking at Holy Trinity Church in greater detail, it is described how

The Holy Trinity Church originally came under the Priory of St Peter in Bath and was largely rebuilt between 1508 and 1540 by the rector, Thomas Key. His rebus, a 'T' entwinned in a key can be found embellishing the church and other interesting features include the remains of a rood loft and a curious pulpit set in a niche in the north wall.[5]

Looking at the Old Rectory in greater detail, in 1643 during the Civil War Sir Bevil Grenville was injured at the Battle of Lansdowne and carried to the Old Rectory at Cold Ashton, where he died.[6]

The Domesday Book was a "Great Survey" completed in 1086 used largely in order to determine taxes to be owed as well as holdings and values of people. As such, very brief, listed descriptions were given to settlements such as Cold Ashton.