Cockernhoe is a small Hertfordshire village, in the north of the county and which runs down to within sight of the border with Bedfordshire. The village is found two and a half miles south-west of Great Offley, to whose parish it has been allocated in civic terms. Its population was recorded as 191 in the 2001 census.

The village is built around an extensive village green.

Luton Airport, to the south across the county border, is a dominating presence nearby and provides jobs for many villagers.

The village church, St Hugh, is a "tin tabernacle"; a church built largely of corrugated iron. These were once popular as mission churches thrown up from the Victorian Age, later to be replaced by more permanent buildings. St Hugh's, built in 1904, is one of only two tin churches left in Hertfordshire, the other being the Church of the Ascension in Bedmond. St Hugh's now holds services only irregularly, though the village school uses it for services.[1]

Cockernhoe also has a village school. 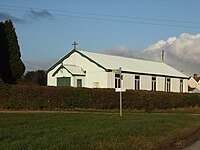