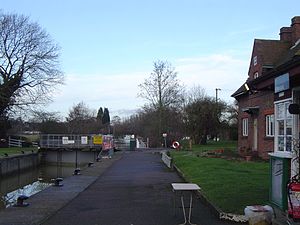 Clifton Lock is a lock on River Thames in Oxfordshire. It is located south of the village of Clifton Hampden and north of Long Wittenham (Berkshire). It is at the start of the Clifton Cut, which bypasses the river to the north of Long Wittenham. The lock was completed in 1822 by the Thames Navigation Commissioners.

The main weir, which was built thirteen years later than the lock, runs across the old navigation of the river. A smaller weir runs just above the lock.

Clifton is one of the few lock sites on the non-tidal river where there was not a pre-existing weir and flash lock, although there was an important ferry. Problems to navigation had long been recognised and the first suggestions for creating a lock "near Clifton Ferry" occurred in 1793, being raised again in 1811. 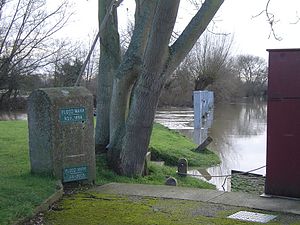 Taken when a high stream is running almost level over the tumbling bay and backwater. The lower marker is the flood level in 2003; the higher marker in 1894

The construction of the lock cut was delayed because the owner of the land was "a lunatic", but it was eventually completed in 1822 together with the lock. No weir was built at the time, giving rise to complaints. In 1826, the Lord Mayor of London visited Oxford by boat, and the City Barge, shallop and attendant boats were "detained at Clifton a considerable length of time.

The weir was eventually erected on the old navigation in 1835. It was enlarged by 1877 and a tumbling bay was created close to the lock. The lock cut bridges were rebuilt in 1884.[1]

The Clifton cut takes the river for nearly a mile before it resumes its natural course. The reach is relatively dull and uninteresting, crossed about halfway along by the Appleford Railway Bridge. Just before Sutton Bridge the river again divides between an old course via Sutton Courtenay and the Culham Cut.

The Thames Path follows the northern bank all the way to Culham Lock.