Chiddingfold is a village in the heart of The Weald in southern Surrey. It stands on the A283 between Milford and Petworth. Chiddingfold Forest is a Site of Special Scientific Interest nearby.

The name of Chiddingfold (found earlier as "Chadynge's fold" and "Chiddingefoulde") is an Old English name, probably meaning the fold (enclosure for animals) "in the hollow".[1] 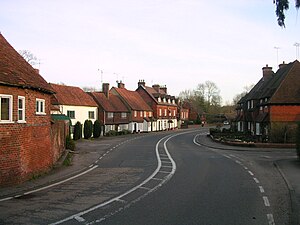 The parish church, St Mary's,the 14th-Century pub, The Crown Inn, a forge, the village pond, shops and cottages lie on three sides of a large village green. There was also once a brick works. In late 2007, The Crown Inn went into receivership and the pub closed. The Surrey Advertiser reported that a number of families arriving for their Christmas lunch found the pub closed; despite having paid for their meal in advance. The pub has now been refurbished and has re-opened under new management.

Chiddingfold became famous for its glass-making and during the reign of Elizabeth I, there were eleven glass works on the green. Chiddingfold glass was used in some of the finest buildings in the land, including St Stephen's Chapel, Westminster, and St George's Chapel, Windsor.

The Guy Fawkes festivities have long been lively. In 1929, bonfire-related delinquency led to the last recorded reading of the riot act in Britain. 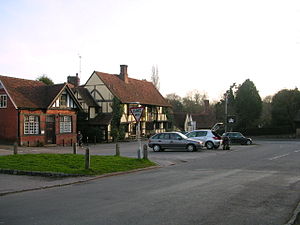 The Crown is one of the oldest inns in England, built as a rest house for Cistercian monks on their pilgrimage from Winchester to the shrine of Thomas Becket in Canterbury. Dating back at least 600 years, it has seen many distinguished visitors down the years. In 1522, Edward VI, the "boy king", stayed here, and it is said that Queen Elizabeth I was a guest in 1591.

The village is known for its torchlit procession, bonfire and fireworks display on a Saturday evening closest to 5 November, Bonfire Night. The bonfire takes weeks to build and is generally as big as a block of flats.

A village festival is also held every year on the village green on a Sunday in June. There is an art festival in the village hall over a weekend in September or October. Chiddingfold Horticultural Society holds competitions.

The Chiddingfold Scout Group is very active with about 100 boys and girls as Beavers, Cubs and Scouts.