Charlton Kings is a village adjoining Cheltenham in Gloucestershire and merging into the townscape. The a parish population was 10,396 according to the 2011 census. 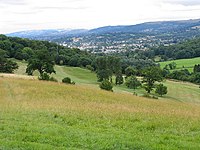 From the lower slopes of Charlton Kings Common

Charlton Kings is in the west foothills of the north-south Cotswolds.

The River Chelt enters the area from the east. The Cotswold Way National Trail is on the parish's eastern boundary and runs alongside Dowdeswell Reservoir and Woodland.

The name 'Charlton' comes from the Old English term ceorla tun, meaning 'yeomen's estate'. It was established as part of the royal manor and Hundred of Cheltenham, hence the term 'Kings' in the name.[3]

Evidence of settlement in Charlton Kings as early as the middle Iron Age was found underneath a Roman villa discovered in 1980. There are many other Roman settlements close by such as Chedworth, Whittington and notably a field called Wycomb (formerly Wickham).[4]

Much of early Charlton Kings was used for agriculture, tended to by small homesteads. This is evidenced by place names surviving until today. These small homesteads gave way to larger manor houses, for example, Charlton House[5] which is now the headquarters of the engineering company Spirax Sarco and the Cheltenham Park Hotel which was previously called Lilleybrook House. There is evidence in local place names of the crops previously grown in Charlton Kings, such as Hempcroft (hemp), Flaxley (flax) and Crab End (crab apples). Other crops known to be grown in the area were cherries and grapes.

Plans for a railway were first drafted in 1872. The Charlton Kings section of the Banbury and Cheltenham Direct Railway line had a troublesome construction mainly due to the clay in the soil, progress was slow, and the line was opened in 1881 with a small station in Charlton Kings. From 1891 the line was also part of the Midland and South Western Junction Railway between Cheltenham and Swindon, a north-south route that went on through Swindon to Andover and the south coast ports. Between 1899 and 1914, the Charlton Kings line had frequent services to Cheltenham, Banbury and Swindon and major expresses to cities such as Manchester, Birmingham and Southampton. Traffic along the line greatly increased due to the transportation of men and munitions southwards during the Great War and the Second World War. After the war, the line was used much less. The Midland and South Western Junction Railway closed in 1961 and the Cheltenham to Banbury line closed on 15 October 1962, when the station at Charlton Kings finally shut. Electric trams operated by the Cheltenham and District Light Railway were also used in Charlton Kings between 1903 and 1930 when they were replaced by buses. 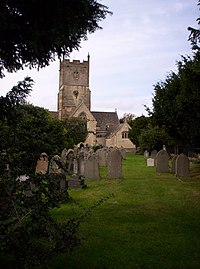 St Mary's church, was built in 1190 by William de Vere, Bishop of Hereford . It is the oldest church in Charlton Kings and was built to ease the mother Cheltenham parish. It is a listed building.[7]

It houses numerous historical artefacts, including an old alms chest used for collecting money to donate to the Third Crusade which may date back to 1190. The church also contains a stained glass window which was donated by Japanese naval officers to the church in 1907 in memory of Robert Podmore.

St Mary's church displays one of the oldest panels of the royal arms mounted in any church in the country, it was acquired in 1660 to celebrate the restoration of Charles II and restored in 1988 to commemorate the 200th anniversary of George III's visit to Charlton Kings.

Two granddaughters of Robert Burns, Sarah and Annie Burns and his great-granddaughter Margaret Constance Burns Hutchinson, were all buried at St Mary's church between 1909 and 1925.

Holy Apostles Church is located in a triangular junction between the roads to London and Cirencester. This location for the church was contested early in its development as local people thought that if another church was to be built, it would be better to have it in a location where it could serve more isolated parishioners. The foundation stone of the church was laid in 1866.

In 1970, during a storm, the church was struck by lightning and the roof and organ burnt down. It has since been replaced.