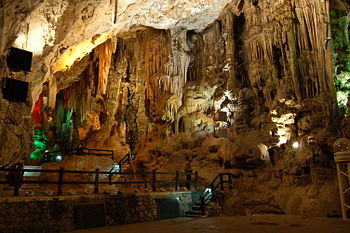 The Caves of Gibraltar are many and various. The territory of Gibraltar is a vast monolith in the sea, a limestone mountain which is riddled with holes, both natural caves and the caves and galleries carved by British ingenuity over the centuries, for defence and storage.

Calcite, the mineral that makes up limestone, dissolves slowly in rainwater, and over the ages this process has formed caves; all along the Rock are over 200 caves.

The largest and more famous is St Michael's Cave, found halfway up the western slope of the Rock; it is a popular tourist attraction and large enough to house a comfortable auditorium where concerts are held.

Gorham's Cave near sea level on the steep, eastern face of the Rock is noteworthy as Neanderthal remains found in it are thousands of years younger than the time Neanderthals were thought to have become extinct 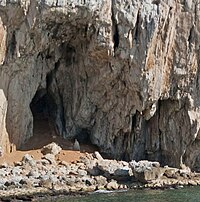 Caves generally form above sea level, though there are several underwater caves in Gibraltar: for the better part of the last 100 thousand years, the level of the sea was well below its present level and geology suggests that it went down to up to 394 feet below its present level. There is a real possibility that the caves now underwater were at one time inhabited.[1] These caves are subject of research projects. 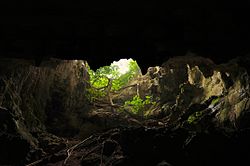 The caves within the Rock of Gibraltar have been used as shelter during sieges and attacks on the islands for hundreds of years. The caves have also been used to store water and ammunition on a routine basis and historically Neanderthals lived in a number of the caves.

There is thought to be over 200 caves in Gibraltar. The caves that are above ground include: