From Wikishire
(Redirected from Cavehill)
Jump to: navigation, search

Cave Hill, sometimes spelt as Cavehill is a basaltic hill of 1,214 feet overlooking the city of Belfast, and one of the Belfast Hills ringing the city in south-eastern County Antrim. It forms part of the south-eastern border of the Antrim Plateau.

The hill is distinguished by its famous 'Napoleon's Nose',[1] a basaltic outcrop which is said to resemble the profile of the Emperor Napoleon I.

The hill was formerly known as 'Collinward Mountain', and more historically was apparently 'Ben Madigan', which has been derived as meaning "Madagán’s peak" after a king of Ulster who died in AD 856.

All of Belfast can be seen from the summit of Cave Hill, as can the Isle of Man and Galloway on clear days. It shares with Arthur's Seat in Edinburgh a rare distinction in that the hill stands just a few miles from the centre of a major city.

Cave Hill is thought to be an inspiration for Jonathan Swift's Gulliver's Travels. Swift imagined that the Cave Hill resembled the shape of a "sleeping giant safeguarding the city".[2]

Most of the lower east side of Cave Hill lis encompassed within the Belfast Castle estate, which has as its focal point the imposing 19th-century Scottish baronial castle. The castle was designed by Charles Lanyon and constructed by The 3rd Marquess of Donegall in 1872 in the Deer Park. The slopes of Cave Hill were originally used as farmland but, from the 1880s, a major planting exercise was undertaken, producing the now familiar deciduous and coniferous woodland landscape. Belfast Castle estate was given to the City of Belfast by The 9th Earl of Shaftesbury in 1934. 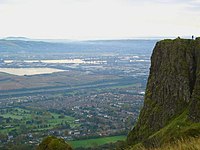 McArt's fort with Belfast in the background

There are three large caves in the hill, which give Cave Hill its name. The lowest is 21 feet long 18 feet wide and varies from 7 to 10 feet in height. Above this is another cave; 10 feet long, 7 feet wide and 6 feet in height. Above this is the third major cave, said to be divided into 2 unequal parts, each of which is more extensive than the larger of the other caves, but the ascent is notoriously dangerous and thus few venture to it.

The caves are man-made, and it is postulated that they were originally excavated for iron-mining.

Adjacent to the lowest cave is 'The Devil's Punchbowl', also sometimes called 'The Devil's Cauldron', a site where Iron Age farmers corralled their cattle. This consists mainly of a steep hill, mainly of rocks and boulders, and is considered dangerous to amateurs. 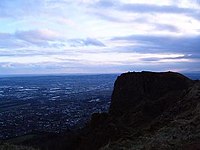 This fort, on the summit of the hill, is an example of an old ringfort or ráth. It is protected on one side by a precipice and on the others by a single ditch, ten feet in depth and twenty-five feet in width; a vallum of large dimensions. The enclosed area is nearly level. The flat top of the fort is 50 yards from north to south, and 60 yards from east to west.

It is believed that the fort's inhabitants used the caves to store white foods for the winter and may have served as a refuge during times of attack.

Eastern prospect looking towards Carrickfergus and across the sea 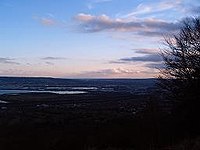 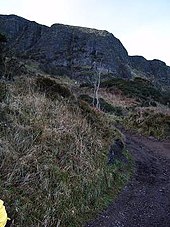 The hill was known in the original Gaelic as Beann Mhadagáin (meaning "Madigan's hill"), after one of two Kings of Ulaid: Matudán mac Muiredaig, who ruled from 839 to 857 A.D., or a later king, Matudán mac Áeda (who reigned between 937 and 950). The later king's grandson, Eochaid mac Ardgail, was killed at the battle of Crew Hill in 1004, in which the Men of Ulster were defeated by their old enemies, the Cenél nEógain. It is from him that McArt's Fort derived its name.

The residential neighbourhood at the foot of Cave Hill's entrance is derivatively known as Ben Madigan, with street names to match, and is a wealthy semi-outer city, semi-suburban area. The name 'Ben Madigan' can also be found attached to buildings, schools etc. close to the area, e.g. the Belfast Royal Academy has the Ben Madigan Preparatory School on the Antrim Road.

The founders of the Society of United Irishmen, Theobald Wolfe Tone and Henry Joy McCracken allegedly met at Cave Hill in 1795 to take an oath to launch the rebellion of 1798. McCracken was captured on Cave Hill in 1798.

The crowning stone Giant's Chair of the O'Neill clan was apparently sited on Cave Hill summit until 1896 and gave its name to the nearby Throne Hospital.

During the Second World War, a bomb dropped prematurely during a German bombing raid on Belfast exploded, causing a large crater near the grounds of Belfast Castle. It is understood that RAF Bomber Command was situated on Cave Hill in the early years of the War before relocating to Castle Archdale in Fermanagh, so the German bomb might have been intentional.

On 1 June 1944, an American Air Force B-17 bomber crashed into Cave Hill during heavy fog, killing all ten crew instantly. The incident inspired Richard Attenborough's film, Closing the Ring. Some scenes of the film were shot on Cave Hill. The site of the crash is easily accessed by way of Carr's Glen Country Park where the field, known locally as 'The Bomb hole Field' remains entirely open to public.

The hill owes its characteristic shape to Paleocene basalt lava flows, from 65 million years ago. This is underlain by Cretaceous—145 million years—Ulster White Limestone and below this is Jurassic—200 million years—Waterloo Mudstone Formation, more commonly known as Lias clay.

Limestone was mined on the southern flanks of Cave Hill in Victorian times and transported to Belfast docks by way of a horse-worked railway along the Limestone Road. The railroad was abandoned in the 1890s. Two small hamlets—Daddystown and Mammystown—were built on either side of the railway track in the early 1820s as dwellings for quarry workers. Some of the local avenues and streets bear the name 'Waterloo', in reference to their geological origins.

Cave Hill Country Park, Belfast Zoo and Belfast Castle are magnets for locals and tourists alike. In the 18th century the townfolk of Belfast flocked there on Easter Monday for the Cave Hill fete, near a spring known as the 'Volunteers' Well'. The summits offers stunning views southwards over Belfast City and Lough towards the Mourne Mountains, Scrabo Tower and Slieve Croob. On a clear day, the eastern prospect reveals views of Carrickfergus, the Mull of Galloway and the Isle of Man.