The name of the village is from the Manx language and may mean "Lord's port" or "Iron port". In modern Manx its name is Purt Çhiarn.

The "Lord" of the name may possibly refer to the parish of the Holy Trinity (Kirk Christ Rushen).

Another possibility is that the name is derived from sheear, meaning "westerly".[1] 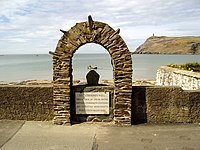 The outer breakwater, visible at low tide only, was an abandoned project constructed in 1863 using the Port Erin Breakwater Railway and saw the first steam locomotive used on the island; a severe storm of 1884 later destroyed the breakwater and it was never rebuilt. Today, a marker buoy shows the extent of the breakwater, and the landward end is still clearly discernible. To the north-east, by the A7 road, are the earthwork remains of a motte and bailey castle known as Cronk Howe Mooar, possibly the site of a timber fortification built by Magnus Barelegs [Barefoot] c. 1100.

The beach is sandy and is bounded by two headlands which (on windy days) funnel the prevailing westerly wind towards the village. On sunny days, the bay acts as a suntrap. One headland, Bradda Head, has a memorial tower called Milner's Tower. The promenade, which is somewhat higher than the seafront, primarily consists of hotels - mostly built in the Victorian era, although due to changes in taste among tourists, many of these are being converted into flats and apartments. The town is famed for its views including spectacular sunsets over Port Erin Bay and Bradda Head, as well as glimpses of the Mourne Mountains in County Down in the distance.

Port Erin station forms the western terminus of the Isle of Man Railway and sits in the centre of the village. The station has been described as "the most beautiful building in town" and is constructed of distinctive red Ruabon brick in an unusual design specifically to fit into its diagonal location between the platforms and the nearby road.

The station is now a fraction of its original size, with the former bay platform and sidings now occupied by the storage yard for Bus Vannin, whilst an additional area once used for maintenance has been replaced by The Haven public house. More recent developments have seen the platform shortened and a carriage shed constructed in the yard, capable of storing eight carriages. Prior to this the rolling stock was stored in the open. 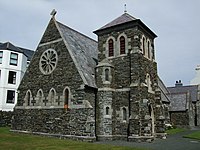 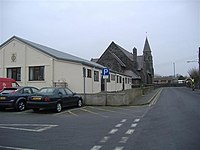 St Catherine's, the largest church in the village, stands on Church Road at its junction with the upper promenade, within its own grounds.

Grace Baptist Church was built in 1982 at the same time and in a similar architectural style to a surrounding housing estate. This congregation began life in neighbouring Castletown before relocating and expanding its current headquarters in 1985; since this time the building has also been modified and expanded subject to demand. 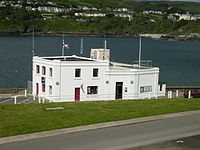