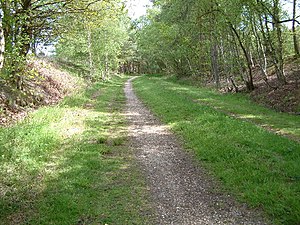 The Castlemain Trailway near Ringwood

The Castleman Trailway is a rail trail, a footpath created mainly on the trackbed of an old railway line, running for 16 miles through south-western Hampshire and south-eastern Dorset. Portions of the trailway are also a cyclepath but the middle section from East Wimborne (close to The Old Thatch public house) to the River Allen bridge (just south of Wimborne) is not cyclable.

One trailhead is on Bickerley Road in Ringwood and the other trailhead is the car park at Upton Country Park in Poole. (From here, a cycle path runs along the sea front, all the way to Poole railway station). The entire Castleman Trailway path is waymarked.

The path begins in Ringwood and passes through the village of Ashley Heath, before crossing the Moors River into Dorset, and running by West Moors, Oakley and Broadstone and Upton, as well as Upton Heath and Upton Country Park (50°44’17"N, 2°1’41"W).

The trailway is part of the former Southampton and Dorchester Railway line which ran from Brockenhurst to Hamworthy Junction via Ringwood. It was known as "The Old Road". This circuitous route was promoted in the 19th century by the Wimborne solicitor Charles Castleman, and was chosen because of the need to run through populated areas at a time when Bournemouth was a small village. Many people called it "The Castleman Corkscrew" owing to the number of curves.