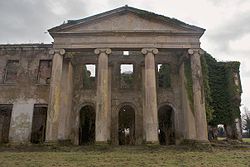 The ruins of the 'Castle of Connell' (in fact the castle of a family named Gunning), from which the name of the village derives, was built on a rock outcrop overlooking the bend of the river. It was destroyed in a siege by the army of General Ginkel, fighting in support of the Army of William of Orange at the end of the 17th century. Even today a large chunk of the castle wall lies some fifty feet from the castle, thrown clear across the road by siege cannons. A footbridge over the Shannon - built during the 1939-1945 Emergency by the Irish Army under Captain Carley Owens - connects the counties of Limerick and Clare. The nearby Mountshannon House is a testament to John FitzGibbon, 1st Earl of Clare, who in the late 18th century was the Attorney-General for Ireland and subsequent Lord Chancellor of Ireland. FitzGibbon was a Protestant hardliner and helped usher in the Acts of Union 1800. The house where he and his descendants lived was burnt to the ground by the IRA in the 1920s.

Many fine nineteenth-century buildings overlook the Shannon in Castleconnell. One of these, the former schoolhouse, is now home to the Irish Harp Centre. Another, the former convent, is now the Castleoaks House Hotel. A little south of the village lies the ruins of the once-grand Mountshannon house, a Palladian mansion gutted by fire early in the 20th century.

Known for its fishing - both coarse and sport - it has a history as a fishing destination stretching back into the 19th century. Main catch was salmon and trout. The local pub Shannon Inn became well known for its fishing clientele that stayed there over the years.

The Shannon Electricity Scheme and its Ardnacrusha dam at Parteen changed the fortunes of the village considerably in the 1930s when it reduced the flow of water south of the dam to approximately one sixth, dropping water levels along the Shannon.

The engineers added a fish lift to the dam, allowing fish to be lifted in a water-filled container and thereby pass upstream to their traditional spawning beds. The river at Castleconnell is also known for its rich bird life, and particularly its swans, many of which are migratory Icelandic whooper swans wintering and breeding on the river.

Boxer Andy Lee was raised in Castleconnell from the age of 14. On 13 December 2014 he became World WBO Middleweight champion.[2]

Castleconnell boat club has been in existence since 1983. It is located at World's End (also known as Worral's End).[3][4] Castleconnell has one of the best stretches of water to row on in Ireland. Rowers have a smooth, wide water to row on for two miles until O' Brien's bridge. Just beyond the bridge, the rowers have another mile before they come to a water flow regulator.