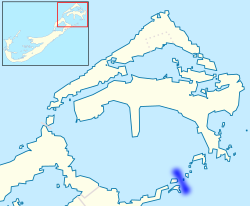 Castle Roads is the primary channel by which vessels enter Castle Harbour, Bermuda, from the Atlantic Ocean. Although little used, today, except by pleasure boats, Castle Harbour was once an important anchorage,[1] and an access route used by ships to reach St George's Harbour, which is still an important harbour.

A string of islands and rocks lies across the south mouth of Castle Harbour, and Castle Roads is the largest channel through these, and the only one suitable as a channel for larger vessels. Historically, Castle Roads was defended by four 17th-century forts; King's Castle, Devonshire Redoubt, Charles Fort, and Southampton Fort. These were most of the forts arrayed across the islands of Castle Harbour (though not all on Castle Island, known collectively as the Castle Islands Fortifications.[3] Together with St George's Town, on neighbouring St George's Harbour, and other nearby seventeenth-century fortifications, the Castle Islands fortifications are a UNESCO World Heritage site.[4]