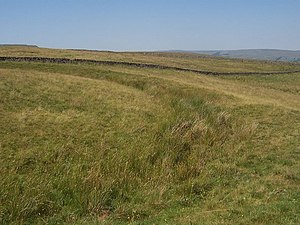 Castle Dykes Henge is a Class I Neolithic henge earthwork in Wensleydale, in the North Riding of Yorkshire. It is found between the villages of Aysgarth and Thornton Rust, on the south side of the dale.

The site consists of a roughly circular bank approximately 87 yards in diameter with an internal ditch.[1][2]

It is reported that excavation work took place in 1908, though there is little physical evidence of this as the henge appears to be mostly intact.[3] In 2015 the Royal Archaeological Institute awarded a research grant for a survey of the site and palaeoenvironmental sampling.[4]