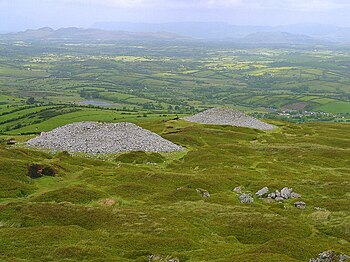 Two of the tombs at Carrowkeel

Carrowkeel is a Neolithic passage tomb cemetery located in south County Sligo, near Boyle, County Roscommon. They were built between about c. 3400 BC and 3100 BC.

Carrowkeel is considered one of the "big four" passage tomb cemeteries in Ireland, along with Brú na Bóinne, Loughcrew, and Carrowmore.

Carrowkeel is set on high ground above Lough Arrow in the Bricklieve Mountains, and the tombs seem to be oriented towards the area of Cuil Irra, Knocknarea and Carrowmore.

There are fourteen passage tombs in Carrowkeel, and some can be entered by crawling through a narrow passage. Twelve more passage tombs are located close by, most of which form part of the Keshcorran complex.[1]

Close to Lough Arrow and just north of Carrowkeel is another, apparently related, giant passage tomb, Heapstown Cairn. This is part of the legendary Moytura, a site of battles between the Tuatha Dé Danann, the ancient gods of Ireland, and the demonic Fomorians.

The monuments at Carrowkeel were originally excavated by a team of researchers in 1911, led by Robert Alexander Stewart Macalister, accompanied by Robert Lloyd Praeger and Edmund Clarence Richard Armstrong. These excavations led to an array of findings including animal bones, cremated human remains, human bones, and tools and pottery from both the Neolithic Age when the monuments are thought to have been originally constructed, and the Bronze Age, which began about 2,000 years later. The particular type of crude pottery found in the Irish passage tombs is called Carrowkeel Ware, having first been recorded in the Carrowkeel Monuments.

In 'The Way That I Went', 1937, Praeger gives an eerie account of the first entry into one of the Carrowkeel monuments.

"I lit three candles and stood awhile, to let my eyes accustom themselves to the dim light. There was everything, just as the last Bronze Age man (sic) had left it, three to four thousand years before. A light brownish dust covered all... There beads of stone, bone implements made from Red Deer antlers, and many fragments of much decayed pottery. On little raised recesses in the wall were flat stones, on which reposed the calcinated bones of young children."[1]

Because the original excavation occurred in the early days of archaeology, it suffered from unscientific documentation, and many of the artefacts found on-site were lost. Although Macalister was acquainted with contemporary archaeological methods, he acted hastily at Carrowkeel and his removal and disturbance of the chamber floors hampered the investigators who followed him.

The original excavation also mistakenly dated the monuments as purely Bronze Age structures, which was later found to be incorrect after further research in the 20th Century. Circumstantial Carbon 14 dating places the tombs at between 5400 and 5100 years old (3400 to 3100 BC), so that they predate the pyramids on Egypt's Giza plateau by 500–800 years.

Visitors to the site are asked not to climb on the cairns, or damage the monuments in any way, and not to take anything in or out of these ancient tombs. Some parts of the site contain deep crevices, holes and cliff faces.