Carreg Cennen Castle stands near the River Cennen, in the village of Trapp, Carmarthenshire, four miles south of Llandeilo. The name 'Carreg Cennen' means Rock of the Cennen.

The castle is within the Brecon Beacons National Park, in a spectacular location perched atop a limestone precipice.[1][2] Carreg Cennan has been in a ruinous state since 1462. It is now in the care of Cadw, and opened to visitors.[3] Cadw has worked to stabilise and to a limited extent restore some of the remains.

Carreg Cennen Castle consists of a strongly-walled and towered square court. There are six towers, all of different shapes, including a great twin-towered gatehouse on the north side.[4] A range of apartments on the east side of the inner court, or ward, includes a hall, kitchens, chapel, and the so-called 'King's Chamber'. This chamber has a well-carved stone fireplace, and traceried windows, one facing into the courtyard, the other outwards commanding impressive views to the south. These date from the late 13th or early 14th century.[4] 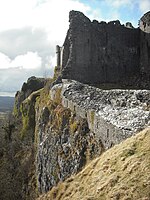 The cliff below the castle 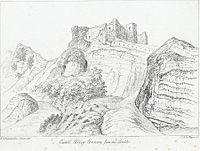 The castle is protected by limestone cliffs to the south and rock-cut ditches to the west. To the north and east there is an outer ward, and within that a barbican, gatehouse, and three drawbridges over deep pits protected the access to the inner ward.

Ths castle did not have a keep as such and the gatehouse acted as the castle's keep because this was the tallest part of the fortress.

In the south-east corner of the inner ward steps lead to a vaulted passage and a natural cave beneath the castle, which leads deep into the hillside. A fresh water spring rises in the cave, which would have been a useful supplement during dry weather when the castle would have had difficulty harvesting rainwater to fill the rainwater cisterns.

The castle is accessed by way of a steep climb up the hill from Castell Farm, which is near the car park. A large threshing barn has been converted to tearooms and a shop, whilst the majority of the farm buildings, around a traditional farmyard, retain their agricultural purposes. Since 1982 these have been part of a farm park with rare and unusual breeds of cows and sheep.[5]

Human remains found at the original site of Castell Carreg Cennen date human activity at the location back to prehistoric times. The site may well have also been an Iron Age hillfort.

Roman coins from the 1st and 2nd century have also been found, although it is unlikely the Romans occupied this site on a permanent basis.

The first masonry castle was probably built by the Rhys ap Gruffydd, who died in 1197, and it remained a possession of the Deheubarth dynasty for the next 50 years. In 1248 Rhys Fychan ap Rhys Mechyll's mother Matilda de Braose, to spite her son, granted the castle to the Norman English, but before the English took possession of it Rhys captured the castle.

For the next 30 years it changed hands frequently between Rhys and his uncle Maredudd who were fighting for control of the Kingdom of Deheubarth. In 1277 it was captured by the forces of King Edward I of England, recaptured by the Welsh in 1282 and in Edward's hands again the following year.

In 1283 King Edward I granted the castle to John Giffard, the commander of the troops at Cilmeri where Llywelyn ap Gruffudd (The Last) was killed. Giffard was probably responsible for the remodelled castle we see today.

In early July 1403 Owain Glyndŵr, together with 800 men, attacked Carreg Cennen, but, although inflicting severe damage to the walls, failed to take the castle. Glyndwr's forces laid siege to Carreg Cennen for several months, with Owain himself present, but it was doughtily defended by a man who was to marry one of Glyndwr's daughters just a few years later, Sir John Scudamore of Herefordshire. (After Glyndŵr's final defeat he disappeared and one rumour has it that he became a servant on Scudamore's estate, but this is in the realms of legend.)

Wars of the Roses

In 1409 the damage from Glyndŵr's siege was repaired. However, in 1461, during the Wars of the Roses, Carreg Cennen became a Lancastrian stronghold. A Yorkist force subsequently captured the castle and set about demolishing it with a team of 500 men.

Ownership of the castle passed to the Vaughan and Cawdor families, and from the 18th century it started to attract artists (J. M. W. Turner sketched the castle in 1798). The second Earl Cawdor began an extensive renovation in the 19th century, and in 1932 Carreg Cennen was given to the guardianship of the Office of Works. In the 1960s Carreg Cennen Castle was acquired by the Morris family of Castell Farm, when Lord Cawdor's legal team inadvertently made a mistake in the wording of the deeds and included the castle as part of the farm. Today, the castle remains privately owned by Margaret and Bernard Llewellyn, daughter and son in law of the late Mr. Gwilim Morris, but maintained by Cadw.[6]