Cardington is a small, rural village in the midst of Shropshire, to be found to the south of Shrewsbury, near Caer Caradoc Hill. The nearest town is Church Stretton.

The wider parish also contains the villages of Enchmarsh and Plaish. Most of the parish is in the Shropshire Hills 'Area of Outstanding Natural Beauty'.[1]

In the Domesday Book the village is referred to as Cardintine and as being under the fief of Rainwald Vicecomes (sheriff). It is recorded that there were 11 leagues of woodland. Soon after that date the area had associations with the Fitzalans (ancestors of the Earls of Arundel), who gave Cardington and Lydley Hayes (or deer park) to the military order of the Knights Templar in about 1120. The order was suppressed in 1308 and the lands involved reverted to the original donors.

Subsequent history is largely based on several important families that lived within the parish, some of whom started charities for the education of the young or for the provision of food for the poor. One example is the Old Free School which still stands next to the churchyard and was provided from a bequest in the will of William Hall in 1740 for the building of a schoolhouse and the maintenance of the schoolmaster.[2]

The village remains unspoilt in its quiet, country origin; it form, layout and overall size was already well established by the 14th century and remains largely unchanged. There are several buildings that date from before 1600 including "The Barracks", the Malster’s Tap (of c. 1580) and its associated Longhouse. Several other buildings belong to the early 17th century including Manor Farm, Grove Farm, the Royal Oak public house and also the timber framed barns that are common throughout the village. The old Free School is an early example of a brick building in this part of rural Shropshire.

The remaining listed buildings and most of the unlisted cottages date from between the early 18th and 19th centuries, the most ambitious of which is the old Vicarage on the western fringe of the village. The latter was built c. 1814–15 and is an accomplished piece of domestic design from the Regency period.[2] 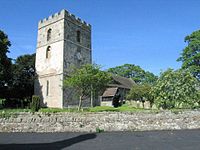 The most important building in the village is the Church of St James (a grade I listed building), the nave of which dates from the Norman period. In plan it is typical of the simplest of churches from the Norman period, consisting of a short rectangular nave with a squat west tower. A chancel was added in c. 1300 in the form of a simple continuation of the nave.

The linear character of the building is carried into the strong west tower, which rises in three stages and is crowned by an embattled parapet. The top or belfry stage was added in the 14th century. The fine timber porch was added in 1639.[2]