Cara is a small, uninhabited island off the west coast of Kintyre in Argyllshire. It lies about half a mile south of Gigha and the only access to the isle is from Gigha, if you can find a local boatman who will take you over.

The best view of Cara from the mainland is from the beach opposite Beachmenach Farm, about half way between Tayinloan and Muasdale.

Cara was known for a herd of feral goats, though very few of these remain.

The name "Cara" is a popular girl's name in the local area and in Scotland in general; it may be translated from the Gaelic as "dearest" or "dear one". 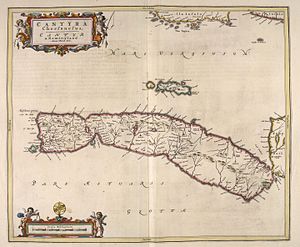 Blaeu's 1654 Atlas with Gigha and Cara in the centre

Cara is owned by the MacDonalds of Largie and is reputedly the only island still in the possession of direct descendants of the house who were the Lords of the Isles and thus rulers of all the Hebrides before the MacDonald forfeiture of 1493.[1]

Since 1974, Cara has been leased to the Teggin family, who have renovated Cara House, the only habitable building on the island.[1]

The liner Aska was sunk on 22 September 1940 on rocks northwest of the island after being struck by German bombers.

Legend says that Cara is the home of the Uruisg or broonie, the familiar spirit of the Macdonald of Largie family.

A rock formation known as the Broonie's Chair is found at the extreme southern tip of the island. It is said that the Broonie will come and get you if you sit in his chair.