Cairnpapple Hill is a hill in West Lothian with a dominating position in the Central Lowlands giving views from the summit to both coasts, on the Forth and the Firth of Clyde.

In a county not known for its hills, Cairnpapple Hill rises to a summit at 1,024 feet above sea level, which makes it the highest point in West Lothian; the county top at that altitude being the south summit, though the next-door hill, The Knock, measured at 1,023 feet follows close behind. Cairnpapple Hill is found about two miles north of Bathgate.

The hill is best known for its ancient burial cairns and the signs found there of ritual use over thousands of years: it was apparently used and re-used as a major ritual site over about 4,000 years, and in its day would have been comparable to better known sites like the Standing Stones of Stenness.

In the 19th century the site was completely concealed by trees, then in 1947–1948 excavations by Stuart Piggott found a series of ritual monuments from successive prehistoric periods. In 1998, Gordon Barclay[1] re-interpreted the site for Historic Scotland. 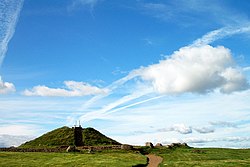 The burial mounds for which the hill is known lie a little to the north of the true summit.

Remains from the Neolithic period indicate ritual use here about 3500 BC; there are signs of small hearths, and precious objects left on the hill, presumed to be left as offerings, including fine pottery bowls and stone axe heads imported from Cumberland and Wales.

Probably around 3000 BC[2] a Class-II henge was constructed and the hilltop was surrounded by a bank outside a ditch about 12 feet wide cut over three feet into the rock, with wide entrances from north and south. Inside this an egg-shaped setting of 24 uprights (thought to have been timber posts, or possibly standing stones) enclosed an inner setting of similar uprights.

Bronze Age finds appear; a small stone and clay cairn just off centre inside the monument, with a seven-foot high standing stone to the east and a setting of smaller stones. Also aligned to this cairn were sockets for three upright stones at the centre of an arc of seven small pits, six of which contained cremated bones and two contained remains of bone skewer pins. Under the cairn traces were found of at least one burial, with wooden objects (perhaps a mask and club) and pottery in the style of the beaker people, which indicates a date around 2000 BC.

This cairn was later covered by a second much larger cairn about 50 feet across and several yards high, with a kerb of massive stone slabs, which incorporated Bronze Age burial cists, one of which contained a food vessel pot. Subsequently more stone was brought in to increase this cairn to about 100 feet in diameter, enclosing two cremation burials in inverted urns and now covering the original ditch and bank, making the whole site a tomb monument.

Lastly, inside the ditch to the east four graves considered Iron Age are now thought to be early Christian because of their east-west alignment, and are dated to around AD 500 to 1000. 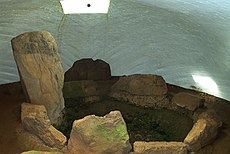 The hill is not a challenging climb and is popular visitor attraction. Roads tickle the lowers slopes on every side and an access road runs up towards the top, between the south summit and the archaeological site, so one may simply cycle or drive up, taking care to walk to the right top; whether for height (south) or history (north).

Though the climb is not hard, the reward at the top is a grand one. The view reaches far in each direction: the Forth Bridges are not far below and Fife beyond, and on a clear day one may see clear cross Fife to the Highland mountains. Grangemouth industry burns its great flames to the north-west, the Bass Rock sits dark and brooding to the east and on a good day to the west one can see the Isle of Arran.

The burial cairn site is open to the public April to September (check opening times) and has a small visitor centre concerning the burial cairn. The 1940s excavations have been partly covered by a concrete dome replicating the second cairn (although the dome is much higher than the cairn and gives a misleading impression of how the site looked) so that visitors can go inside what was once a solid cairn and see the reconstructed graves, and outside this the surrounding post holes and graves are marked by being filled with colour coded gravel like an archaeological plan, with the red gravel indicating upright pits, and the white gravel denoting the alleged Christian burials.