Burghley House is a grand 16th-century country house in standing just south of Stamford in Lincolnshire. The house and its extensive park are within the northernmost confines of Northamptonshire, bunded by the River Welland.

The house was built for Sir William Cecil, later 1st Baron Burghley, Lord High Treasurer to Queen Elizabeth I, Its park was laid out in a later age by Capability Brown.[1]

The house is within the Soke of Peterborough, part of Northamptonshire. It lies a mile south of Stamford, across the River Welland in Lincolnshire and 10 miles northwest of the city of Peterborough. 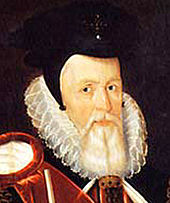 Burghley House was built for Sir William Cecil, later 1st Baron Burghley, who was a key royal adviser from the reign of Henry VIII, rising to become Lord High Treasurer to Queen Elizabeth I and her chief adviser for most of her reign. After the dissolution of the Monasteries, Cecil acquired the lands of Peterborough Abbey and the Abbey's secular jurisdiction over the Soke of Peterborough: his heir today, the Marquess of Exeter, retains the title "Lord Paramount of the Soke of Peterborough", though the authority behind the title has long since been lost.

Lord Burghley's two surviving sons shared in their inheritance: his eldest, Thomas, inherited the title and Burghley House, whilst his younger son, Robert Cecil, received Theobalds House in Hertfordshire. Robert had also inherited his father’s political acumen and became Queen Elizabeth's chief adviser; he was made Earl of Salisbury by King James I. Burghley was until the late twentieth century the residence of Thomas Cecil's descendants, the Earls and, since 1801, Marquesses of Exeter.

In the 1770s, Launcelot "Capability" Brown was engaged to lay the gardens out in his renowned naturalistic style, producing the pattern seen today.

The house is a Grade I listed building, with separately Grade I listed north courtyard and gate.[5] The site is opened to the public.[2] A number of restoration projects are under way.

The house is one of the main examples of stonemasonry and proportion in 16th-century English Elizabethan architecture, reflecting the prominence of its founder and the lucrative wool trade of the Cecil estates. It has a suite of rooms remodelled in the baroque style, with carvings by Grinling Gibbons.[2] The main part of the house has 35 major rooms on the ground and first floors.

There are more than 80 lesser rooms and numerous halls, corridors, bathrooms and service areas.[4][6][7][8]

In the 17th century, the open loggias around the ground floor were enclosed. Although the house was built in the floor plan shape of the letter E in honour of Queen Elizabeth, it is now missing its north-west wing. During the period of the 9th Earl's ownership, and under the guidance of Capability Brown, the south front was raised to alter the roof line, and the north-west wing was demolished to allow better views of the new parkland.[2][4][6][8]

In the Pagoda Room there are portraits of the Cecil family, Queen Elizabeth I, her father Henry VIII and Oliver Cromwell. Many delicately painted walls and ceilings of the house were done by Antonio Verrio.[9]

The village of Burghley recorded in the Domesday Book was abandoned by 1450. The national history body field investigator in 1968 suggests that failure to locate it by archaeology is because it is below Burghley House.[10]

Part of the Grounds, lake and boathouse

The avenues in the park were all laid out by Capability Brown,[11] paying due respect to pre-existing plantings, some of which were from the 16th century or earlier.[12] Brown also created the park's man-made lake in 1775–80. He discovered a seam of waterproof "blue" clay on the grounds, and was able to enlarge the original 9-acre pond into the current 26-acre lake. Its clever design gives the impression of a meandering river. Brown also designed the Lion Bridge at a cost of 1,000 guineas in 1778. Originally, Coade-stone lions were used as ornamentation. After these weathered, the current stone examples were made by local mason Herbert Gilbert in 1844. Queen Victoria and her husband Prince Albert also planted two trees to commemorate their visit.[13]

Recent developments have included starting a sculpture garden around the old ice house and, in 2007, a "garden of surprises" was created using traditional ideas of water traps, shell grottos and a mirror maze, but in a 21st-century style.[14] The Burghley House trust has commissioned contemporary artwork in the grounds from leading artists.[15]

The current Marquess is resident in Canada, the land of his birth, and since 1961 the House has been owned by a charitable trust established by the family.[4][17]

Lady Victoria Leatham, antiques expert and television personality, followed her father, David Cecil, 6th Marquess of Exeter (Olympic gold-medal winning hurdler and runner, IAAF President and Member of Parliament) by running the house from 1982 to 2007. The Olympic corridor commemorates her father.[18] Her daughter Miranda Rock is now the most active live-in trustee.[17][19] However, the Marquessate passed in 1988 to Victoria's uncle, and then to his son, both Canadian ranchers who have not resided there.[20] 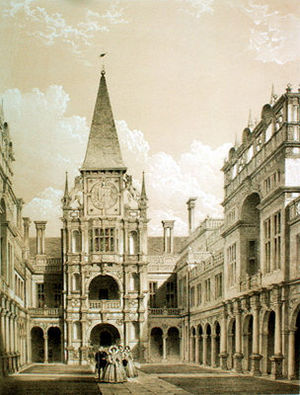 The courtyard of Burghley House drawn by Joseph Nash in the 19th century; figures in Elizabethan costume

Burghley House has been featured in several films. Its virtually unaltered Elizabethan façades and a variety of historic interiors make it an ideal location for historical and period movies.

Films and programmes made at Burghley include: