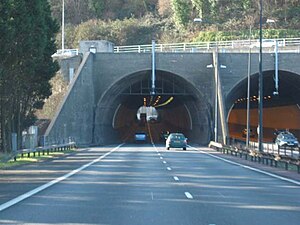 The Brynglas Tunnels carry the M4 motorway under Brynglas Hill in Newport, Monmouthshire. The 1,200-ft-long twin-bored tunnels were the first tunnels in the British motorway network and are still the only bored tunnels.

The tunnels and adjacent M4 motorway Usk bridge were originally planned by Newport Corporation in August 1959 in a plan submitted to the Ministry of Transport. Work started on 10 September 1962 and both structures were complete and open to traffic during the first week in May 1967.[1] During the construction several houses on Brynglas Road (where the modern Newport Lodge Hotel now stands) had to be demolished due to structural weaknesses caused by the tunnelling.

Almost as soon as the M4 Newport bypass (junctions 24-28) had opened, the traffic levels had grown to such a degree that the road had to be widened to three lanes in each direction. This was finished in 1982 but with the exception of the tunnels and Usk bridge which remained as dual two-lane sections (Junctions 25-26).

The tunnels remain a bottleneck on the motorway. Partly due to regular tailbacks at the tunnels, a variable speed limit is in place between junctions 24 and 28.

A new M4 relief road south of Newport has been proposed since 1991 but has yet to be built. Hence the dual two-lane carriageway A48 Southern Distributor Road, connecting M4 junction 24 to junction 28, remains the alternative route.

In March 2012 the National Assembly for Wales published options for consultation including the option to bore further tunnels.[2]