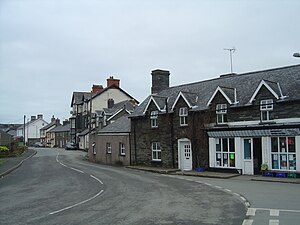 To the south west of the village stood Ynysymaengwyn, a mansion built in 1758 but now demolished. To the south stood Cynfal motte-and-bailey castle, built in 1137 by Cadwaladr ap Gruffydd, brother of Owain Gwynedd.[2]

The poet David Richards (1751-1827), better known as Dafydd Ionawr, was born at Glanyrafon near Bryncrug.

The football club, Tywyn & Bryncrug FC, play their home matches in the village.

This Merionethshire article is a stub: help to improve Wikishire by building it up.
Retrieved from "https://wikishire.co.uk/w/index.php?title=Bryncrug&oldid=26037"
Categories: