Bronllys is a village in Brecknockshire between the nearby towns of Brecon and Talgarth. It has recently benefited from a new bypass as part of the Talgarth Relief Road and Bronllys Bypass scheme.

Despite being a small village it has a swimming pool and small leisure centre, post office and hospital. 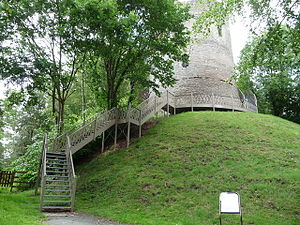 Bronllys Castle motte and tower
Bronllys castle is a motte and bailey fortress standing south of the village, towards Talgarth. The castle was founded in or soon after 1144 when the district was granted to Walter de Clifford by Roger Fitzmiles, 2nd Earl of Hereford. Walter seems to have been responsible for building the round tower on the motte for in 1165 it caught fire and a stone tumbling from the battlements killed Earl Roger's last surviving brother Mahel de Hereford. In September 1233 Walter III de Clifford had a force of over 200 men here defending the castle against his father-in-law Llywelyn ab Iorwerth. The castle passed from the Cliffords to the Giffards and eventually the de Bohun Earls of Hereford.

In 1399 Henry IV took possession of all de Bohun property. The castle was additionally fortified against Owain Glyndŵr during the early years of his rebellion in the early 15th century. Bronllys Castle was never again occupied and by 1583 had fallen into disrepair. A short spell in the possession of the Duke of Buckingham did nothing to improve its state, and in 1521 was once again crown property, where it has remained ever since.[1] It is now in the care of Cadw, the arm of the Welsh Assembly charged with care of historic monuments and is open to the public between April and October.[2]