Brodick Castle is a castle outside the port of Brodick on the Isle of Arran, an island of Buteshire. It was previously a seat of the Dukes of Hamilton, but is now owned by the National Trust for Scotland.

A fortress has been on the site since at least the fifth century, when Gaelic invaders from Ulster expanded their kingdom of Dál Riata. By the tenth century, Norse influence had grown, and Arran formed part of Sudreys or Súðreyjar, administered either from Dublin or Orkney and nominally under the control of The King of Norway. This can be deduced by the number of Scandinavian place-names on the island including Brodick, or Breiðvík (Broad Bay). The site is thought to have been a centre of relative importance, on account of its strategic position on the Firth of Clyde.

In 1263, King Haakon of Norway was defeated by King Alexander III of Scotland at the Battle of Largs, a short distance across the firth and Hákon's forces retreated to Arran, and thence to Orkney an in the Treaty of Perth in 1266 Arran became part of Scotland.

During the wars between Edward I of England and the various rival claimants to the Scots throne, an English garrison was stationed at Brodick. At the behest of Robert the Bruce, James Douglas, Lord of Douglas, early in the winter of 1307 previous to their attack on Carrick, attacked forces supplying Brodick Castle giving a first minor victory and gaining their forces much needed supplies.

In 1406, the castle was badly damaged by an English force that had sailed into Brodick Bay. Further destruction was inflicted by John of Islay in 1455. At some point after 1470 the castle was granted by James III to his brother-in-law, James Hamilton, 1st Lord Hamilton. His son, James Hamilton, 2nd Lord Hamilton was created Earl of Arran in 1503. At this point Hamilton added the Lymphad of the Isles to his Armorial bearings

The castle had been rebuilt by the Earl by 1510 in the form of a Tower house, but suffered at the hands of the Campbells and the MacLeans. During the "Rough Wooing" of Mary, Queen of Scots, Brodick castle was attacked by an English force led by the Earl of Lennox on behalf of Henry VIII, in revenge for the actions of the 2nd Earl. Lord Arran was the Regent of Scotland whilst Mary was in her infancy, and was second in line to the Scots throne. In 1543, he had been heavily involved in arranging the marriage of Mary to the Dauphin of France; before this she had been promised to Edward, Prince of Wales. Arran was rewarded for his efforts, however, and was created Duke of Châtellerault in the Peerage of France. During Regent Arran's tenure at Brodick he continued to enlarge and expand the castle.

In 1639 as Presbyterians and Episcopalians fought, James Hamilton, 3rd Marquess of Hamilton, the King's adviser was sent north to enforce the King's will to re-establish the place of bishops in the Kirk. Archibald Campbell, 1st Marquess of Argyll, was the de facto ruler of Scotland and leader of the Presbyterian faction. Argyll seized Hamilton's castle of Brodick. Hamilton was made a Duke in 1643 and recovered his castle the following year at the outbreak of Civil War. It was lost again to the Campbells in 1646, as the Royalists fortunes foundered. The Duke was captured after the disastrous Battle of Preston, and faced the block in March 1649. He was succeeded by his brother William, Earl of Lanark, but the second Duke died of wounds received at the Battle of Worcester in 1651.

The Duchy of Hamilton and Earldom of Arran passed to the first Duke's only surviving child, Anne. She had been unwittingly sent to Brodick for safety. In 1650, Oliver Cromwell's Roundheads had taken control of the castle and had extended it by building an Artillery battery to defend the Firth at this strategic position. Duchess Anne returned to her estates in Lanarkshire and West Lothian and in 1656 married William Douglas, 1st Earl of Selkirk. Anne did not return to Brodick, however her husband the newly created Duke of Hamilton for life, used the castle as a base for hunting excursions.

In the following years Brodick was used mainly as an occasional sporting estate. In the nineteenth century, it became residence for the eldest son of the 10th Duke, styled the Marquess of Douglas and Clydesdale.

William, 11th Duke of Hamilton married in 1843, Princess Marie of Baden, youngest daughter of the Grand Duke of Baden and Stéphanie de Beauharnais, adopted daughter of Napoleon Bonaparte. In 1844, massive building work was undertaken at the castle, almost trebling the size of the building, under the architect James Gillespie Graham. The Twelfth Duke, William had no male heirs, so although his titles passed to his distant cousin Alfred Douglas-Hamilton upon his death, he entailed the castle upon his only daughter the Lady Mary Louise Douglas-Hamilton. She married James Graham, 6th Duke of Montrose in 1906, and so after more than five hundred years Brodick castle passed out of the Hamilton family. 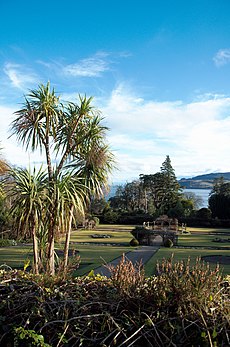 The walled garden at Brodick Castle

The Castle and gardens were acquired by the National Trust for Scotland from the Lady Jean Fforde in 1958, in lieu of death duties upon the death of her mother, the Dowager Duchess of Montrose. The castle is open to the public during the summer, with Brodick Country Park open all year round.

Since 1987, an illustration of the castle has featured on the reverse side of twenty pound notes issued by the Royal Bank of Scotland.[1]

The 1998 film The Governess, starring Minnie Driver, was filmed at Brodick Castle. Bee boles can be seen in the Walled Garden, which was built in 1710.

The older part of the castle is said to be haunted by a "Grey Lady" who starved to death in the dungeons of the castle because she had the plague. A man has been reportedly seen sitting in the library and a White Deer is reputedly seen in the grounds of the castle whenever a chief of the Hamiltons is close to death.[2]