From Wikishire
Jump to: navigation, search
This article is about Brockhampton near Ross-on-Wye. For the other parish, in Broxash hundred, see Brockhampton, Herefordshire.

Brockhampton is a village and parish in the Greytree hundred of Herefordshire. The village is near the River Wye, nine miles south-east of Hereford, eight miles north of Ross-on-Wye, and ten miles south-west of Ledbury. The Wye Valley Walk passes through Brockhampton. The population of the parish in 2011 was 229.[1]

The two most significant buildings in the village are Brockhampton Court and All Saints' Church. Brockhampton Court was substantially rebuilt, in the neo-Tudor style in 1893, as the Herefordshire residence of A.W. Foster and his American wife, Alice. In the late 1870s, Ebenezer Jordan of Boston, Massachusetts had purchased Brockhampton Court, now a retirement home, as a wedding present for his daughter and her groom, Arthur Foster. 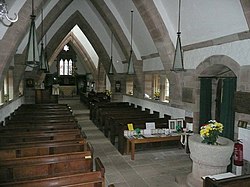 The construction of nearby All Saints' Church, financed by Mr and Mrs Foster (as a memorial to her parents), was completed in 1902, the work of the Arts & Crafts pioneer W.R. Lethaby.

Straddling a sloping south-facing site, the first impression of All Saints' is that of a traditional thatched church. In fact, Lethaby's ingenious 'partnership' of a thatched roof sitting on top of un-reinforced cast-concrete roof, pre-dated current thermal insulation thinking by more than a century.

The interior's most striking feature is the lofty vaulted roof, formed of four bays of lime-washed shuttered concrete, divided by slender sandstone arches (the stone came from the now-redundant local Capler quarry). At Brockhampton, Lethaby predicted the Modern Movement's short-lived passion for patterned concrete surfaces, by leaving the internal face of the Nave's roof lining unplastered.

The architect's decision to carry out the entire project using direct labour craftsmen (eschewing the conventional building contractor route) is thought to have been a contributing factor to his subsequent ill health and decision to concentrate on teaching and writing. All Saints' Brockhampton was Lethaby's last significant building. Randall Wells served as his resident architect on site.

In The Buildings of England - Herefordshire, Nikolaus Pevsner describes All Saints' as "perhaps the most thrilling church in any country of the years between historicism and the Modern Movement".[2] In the introductory section of the revised edition of Herefordshire, All Saints' Brockhampton is described as "One of the most convincing and impressive churches of its date in any country".[3]

The Hotel Monterey Grasmere Osaka, Japan features a three-quarter scale replica of the church as a wedding venue on the 21st & 22nd floors of a tower block.[4][5][6]

The Park, Brockhampton is the cricket ground.