The Bridgewater Hall is a purpose-built concert venue in Manchester city centre in southern Lancashire. The hall is home to The Hallé orchestra, and is the primary concert venue for the BBC Philharmonic Orchestra.

The hall is named after the Francis Egerton, Third Duke of Bridgewater, who commissioned the eponymous Bridgewater Canal that crosses Manchester, although the hall is situated on a specially constructed arm of the Rochdale Canal. It backs onto Great Bridgewater Street. It faces the Manchester Central Convention Complex across Lower Moseley Street.

Notwithstanding the old provenance of its name, the hall was built only between 1993 and 1996, costing around £42 million[1] to build. A peculiar part of its design is that the building sits on a bed of 280 springs, which help reduce external noise.

The Bridgewater Hall currently hosts over 250 performances a year.

The Bridgewater Hall was built as a replacement for the city's famous Free Trade Hall, which had been Manchester's premier public hall since it was opened in in the 1850s. Proposals to replace the Free Trade Hall as a concert venue had been put forward since it was damaged in the Second World War[2] but the hall was repaired and renovated instead. Though it was a popular venue and the home of the city's orchestra, the Hallé, the Free Trade Hall had poor acoustics. Throughout the 1970s and 80s several schemes to replace it were considered but the project became more likely in 1988 after the creation of the Central Manchester Development Corporation.[2]

In the 1990s, land east of Lower Mosley Street and north of Great Bridgewater Street adjacent to the G-Mex exhibition centre (now Manchester Central Convention Complex) which was occupied by a former bus station and car park near the Rochdale Canal was identified as the site for a new hall. A competition inviting architects to present designs for the new concert hall was launched and a proposal by Renton Howard Wood Levin (RHWL) architects was chosen.[2] The development included the construction of a basin on a specially built short arm of the Rochdale Canal and part of the Manchester & Salford Junction Canal providing a waterfront setting for the hall.[3][4]

The Bridgewater Hall held its first concert on 11 September 1996 and was officially opened on 4 December by Queen Elizabeth II, alongside the Duke of Edinburgh. The Bridgewater Hall was one of a number of structures built in the 1990s said to symbolise 'the transition to a new and modern Manchester'.[2] 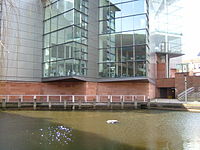 The hall overlooking the Rochdale Canal 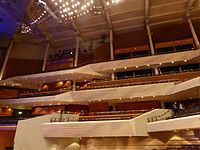 Construction of the hall was a joint venture between Manchester City Council and other dispensers of taxpayers' money, and designed by the architects RHWL. The acoustics were designed by Rob Harris of Arup Acoustics.

The Bridgewater Hall can seat 2341 people over four tiers in the auditorium: the stalls, choir circle, circle, and gallery.[5]

The main auditorium sits on a foundation of earthquake-proof isolation bearings that insulate it from noise and vibration from the adjacent road and Metrolink line.[6] The hall's 26,500-ton superstructure rests on 280 GERB isolation bearings consisting of rows of steel springs between concrete piers. Bridgewater Hall is the first concert hall built with this technology.[3]

The structure is mostly formed from solid, reinforced concrete, moulded and cast like a vast sculpture.[2] The auditorium has a double-skinned roof with a stainless steel outer shell.[3] The lower part of the hall is built of deep red sandstone from Corsehill Quarry in Annan, Dumfriesshire, the upper walls are clad in aluminium and glass. The interior uses Jura limestone.

Inside the hall, the focal point is a £1.2 million pipe organ with 5500 pipes and four manuals,[7] built by Marcussen & Son, which dominates the auditorium, covering the rear wall with wood and burnished metal. At the time of construction, the organ was the largest instrument to be installed in the United Kingdom for a century.[8]

On the plaza outside is the "Ishinki Touchstone", a sculpture by Kan Yasuda made of polished Italian Carrara marble which is white streaked with bluish-grey. The stone weighs 18 tons and was installed in August 1996. Its £200,000 cost was financed by the Arts Council, Lottery Fund, Manchester Airport and Manchester City Council. To prevent vandalism, the stone is coated with an anti-graffiti solution.[9][10][11]

Beside the main entrance is a sculpture of Sir John Barbirolli by Byron Howard (2000).[12]

Since its opening on 11 September 1996, the Bridgewater Hall has been the home of the Hallé Orchestra, the Hallé Choir and the Manchester Boys Choir, and is a regular venue for concerts by the BBC Philharmonic and Manchester Camerata. From September 2002 it has been home to the Hallé Youth Orchestra and Youth Choir, founded for musicians under the age of nineteen who are not in full-time musical education.

As well as concerts, the Bridgewater Hall hosts conferences and events for external parties such as annual presentation evenings. Manchester Metropolitan University has held its graduation ceremony in the hall in July each year since the early 2000s. The Open University also holds one of its Graduate Ceremonies at the hall each year.