Bridell is a hamlet and ancient parish in north Pembrokeshire. The parish includes the village of Pen-y-bryn. Together with the parishes of Cilgerran and Llantood, it constitutes the civil community of Cilgerran.

The Church in Wales parish of Bridell is on the A478 road, two and a half miles south of Cardigan and consists of a few private houses, the church (St David's) and Plas Bridell Manor house, a 19th-century mansion which is now a nursing home.

The derivation of the parish name is obscure.[1] Lying on the western border of the cantref of Emlyn, it has always been essentially Welsh-speaking.

In 1890, local clergy were reported to be in "great distress" through the failure to collect tithes amounting to £1,738 over six parishes, with Bridell owed £249; previous attempts at recovery had been "crushed by riotous crowds".[3] 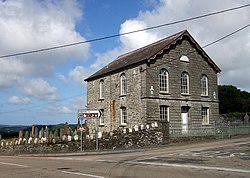 Pen-y-Bryn, also referred to as Penybryn, is a small village situated on the northern side of the parish at a crossroads dominated by the Pen-y-Bryn Arms public house on one side and Penybryn Baptist Chapel, established in 1818,[4] on the other.

The village has outgrown the hamlet of Bridell owing to a building surge in the latter part of the 20th century driven both by local need and by migration from other parts of Wales and the UK. 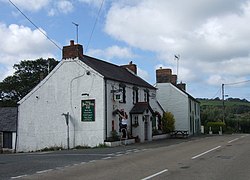 The Pen-y-bryn Arms has stood at the crossroads at least since the 18th century and enjoys both local and passing trade, standing as it does on the main route into Cardigan from the south. The site formerly included a petrol station and garage, both now closed. There is a Victorian post box embedded in the front wall.