Bramcote is a village and ancient parish in the Broxtow wapentake of Nottinghamshire, about five miles west of Nottingham. It was once a separate village but is now a suburb of Greater Nottingham. Originally, one of the main roads between Nottingham and Derby (about 15 miles apart) passed through the old village centre, entering a steep-sided cutting, that formed a blind bend. Today, the main Nottingham to Derby road is the A52, also called the Brian Clough Way.

Until the 1960s there was a country house estate on the north side of the village, but this has passed into public ownership. The house was demolished in 1968 and its grounds became a public park now known as 'Bramcote Hills Park'. This includes grassed parkland and wooded hillside. Nearby places are Beeston, Wollaton, Chilwell and Stapleford.

There are four local schools namely;

In the village centre there is also a primary school, a pre-school nursery and a large recreational park, King George's Park, on its west side on the slopes of a hill with views out over the Erewash valley to the north and west. St John's College is a Church of England theological college situated in Bramcote on the southern edge.

There used to be a second comprehensive school in Bramcote, Bramcote Hills Sport & Community College [5], but this was recently found unsafe and demolished. Local school children were moved into the nearby Bramcote Park and Alderman White schools. The building has now been refurbished and is now the site of Bramcote Hills College Sixth Form.

Bramcote Leisure Centre is located in Bramcote Park, just off the A52. It contains a 33m pool with waterslide (which was recently divided into a 25m pool and family splash pool), a teaching pool, a gym (currently being extended), junior gym, 5-a-side pitch (Home of the majorly successful local team the Bramcote Beers), health suite and creche [6]. The centre achieved Quest Accreditation in March 2008, [7] and in November 2008 was the first centre in Nottinghamshire to achieve the Aquamark, the ASA National Award Scheme for swimming programme quality [8] The Vitality fitness suite has recently had a £250k renovation, refurbishment and extension project completed, the poolside changing rooms have also been updated. The refurbishment programme was carried out by GPS construction (Nottingham) Ltd and overseen by Adam Smith (managing director). 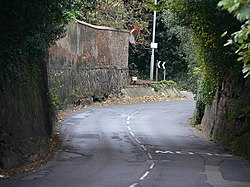 Saint Michael and All Angels Parish Church is the local Anglican (Church of England) church of Bramcote, and is situated on Church Street in Bramcote. Saint Michael's was built in 1861 and celebrated its 150th anniversary year in 2011. Its churchyard contains the war graves of three soldiers of World War I and one of World War II.[6] It was built to replace the old church (off Town Street) of which only the churchyard and tower now remain, as the other sections of the building were knocked down and the bricks used for building the new church. The old church is now also known as the Sunken Church.

Emmanuel Church is an independent Evangelical church that meets in the Bramcote College [9] on Sunday mornings at 1030. There is also a programme for youth and children, a men's breakfast group, prayer groups and house groups. 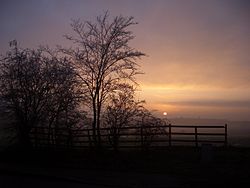 Sunset over Bramcote from just below Devils Bend

Bramcote Park is the biggest of the parks in Bramcote. With an extensive wooded area stretching from Bramcote Park School towards Stapleford, Wollaton and the former landfill site. The park is one of the few sites in Nottingham with a Green Flag Award. The park itself features an extensive children's playground, car park, easy access paths and a family-friendly atmosphere.

King George's Park offers great views across Bramcote. It is on a steeply sloping site with a network of surfaced paths providing a link to the adjacent countryside. There are two free to use tennis courts in the park as well as a children's playground and several parking spaces.

Bramcote Ridge Open Space is an area of approximately 29 acres, consisting of a mosaic of acid grassland, naturally regenerating scrub and mature woodland. It is managed as a nature reserve, and is a designated Grade- II SINC, (Site Important for Nature Conservation), and an 'Area of Restricted Development'. It is surrounded on three sides by residential development. There is no designated car parking area, but it can be accessed on foot from surrounding residential roads.