Bradley Stoke is a new town in Gloucestershire, on the north side of the City of Bristol. It is named after the local Bradley Brook and Stoke Brook streams. The town was planned in the 1970s and building began in 1987. It is predominantly residential with some retail and commercial areas.

The area that is now Bradley Stoke was once a farmland north of the village of Stoke Gifford. The land was divided between the civil parishes of Stoke Gifford and Almondsbury. The area consisted of a number of farms, Bailey's Court and Watch Elm Farm in the south, Bowsland Farm and Manor Farm in the north and Webb's Farm in the middle. Some of the land was used as pasture. A number of woods also existed, Sherbourne's Brake, Webb's Wood and the large Savage's Wood have all been preserved. Fiddlers Wood, the name of which lives on in Fiddlers Wood Lane was all but obliterated by the M4 motorway. Baileys Court Farmhouse is the only original building that exists and was used as offices by the town's developers before becoming the Bailey's Court Inn. Watch Elm Farm was named after a Watch Elm of legendary size that blew down in the mid 18th century. The Stoke Brook flows through the middle of Bradley Stoke. 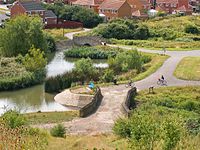 Many of the facilities in the town were to be funded by the housing developers from housing sales, by way of 'Section 106' planning agreements. When house building and sales slowed for a time in the late '80s, there was a significant slowdown in facility completion. This included the late provision of the road joining the north and south sides of the town, and also completion of the doctors' surgery.

The town centre, Willow Brook Centre,[1] opened on 13 October 2008 featuring around 18 units. Stores include several of the main national chains. The new town centre was named by an anonymous resident as part of a competition run by Bradley Stoke Town Council in partnership with Tesco.[2] The centre is situated on the original Tesco supermarket site, and the redevelopment was approved by South Gloucestershire Council on 13 November 2006.

There is a 25m swimming pool. There are six primary schools, a leisure centre with a swimming pool and public library, gym and beauty salon, an emerging district centre, and a secondary school. The comprehensive secondary school, Bradley Stoke Community School, opened in September 2005 and has the capacity for up to 1,080 students.[3] A post-16 centre at the school was completed in Summer 2010.[4]

The Three Brooks Local Nature Reserve is an area of about 150 acres in the town including bluebell woods, rough grassland, brooks, ponds, and the man-made Three Brooks Lake. The lake is home to many common species of waterfowl.

Employment is particularly found along the Great Park Road, at the Almondsbury Business Park, and at the Aztec West development.

The further developments of the Willow Brook Centre and the addition of larger high street chains such as Boots, Peacocks and the Harvester have increased the number of jobs available for local residents as well as boosting trade within Bradley Stoke. In previous years, Bradley Stoke attracted custom through passing trade from those exiting and joining the motorways and commuting, however since the expansion of the willow Brook centre both business owners and potential employees are attracted to this area.