Borris is a small town on the River Barrow, in County Carlow, Ireland. It lies on the R702 regional road. Its name in Irish was originally Buirgheas Ó nDróna; now just An Bhuiríos. The name ‘Buirgheas’ (Borris) means ‘burgage’.

Borris has views of the neighbouring countryside with Mount Leinster and the Blackstairs Mountains to the east, and the Barrow Valley to the west. It is the home to Borris House,[1] the ancestral home of the MacMurrough Kavanaghs.

The town has one of the oldest golf courses in Ireland[2] as well as a 16-arch limestone viaduct (the 16 Bridges) built in 1860 and designed by William le Fanu.[3] It has a mixed national school and vocational school (colloquially known as "The Tech" or "BVS"), a Roman Catholic church, seven public houses, three take-aways, and three convenience stores.

The old school closed in 1980 and has been used by different community groups including Scouting Ireland, which has a branch of Scouts, Cubs and Beavers there. It also houses the Carlow Rural Information Services Project) A branch of Carlow County Library has opened in the old school buildings, and b etween the Library and Project, there is a Tourism Information Point.

Borris House has catered for weddings and held poetry readings and concerts and a "Christmas at the Castle" event in December 2011. It also played host to the National Country Fair in 2012. Borris House also holds a writing festival every summer.[4]

The MacMurrough Kavanagh dynasty, descendants of the Kings of Leinster, are have been based in the town for some time. The family still live at Borris House in the town centre. Built in Tudor style, the house is open to groups by prior arrangement.

The town prospered in the late 1800s as Arthur MacMorrough Kavanagh, the landlord of the time, developed a sawmill and a lace-making industry. He also instigated the building of the 16-arch viaduct, situated at the lower end of the town, which was intended to carry the now defunct Great Southern and Western Railway line between Muine Bheag and Wexford. Borris railway station opened on 20 December 1858, closed for passenger traffic on 2 February 1931 and for goods traffic on 27 January 1947, finally closing altogether on 1 April 1963.[5] 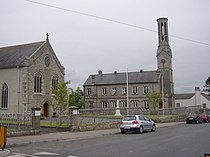 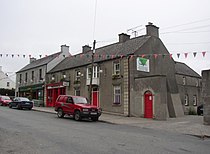