Birstall is a large village in Leicestershire. It is three miles north of Leicester city centre and is considered part of the wider 'Leicester Urban Area'.

Birstall is on the A6 and is the last major settlement before Leicester when arriving from the north. The village centre is just off the A6, along Sibson Road. The village contains two supermarkets, a garden centre and a variety of other shops. There are a number of schools

There is a large housing estate in the north-west of the village, leading off Greengate Lane. 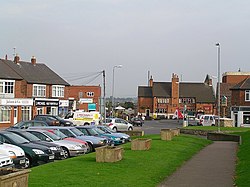 The Grand Union Canal runs through the bottom end of the village, separating it from Watermead Country Park, a series of lakes in the bottom of the Soar Valley, which have been set aside as a recreational area and country park.

The Great Central Railway steam railway has its southern terminus near the village, where the A6 meets the Leicester outer ringroad at Red Hill Circle. Just north of Red Hill Circle, and west of the A6, is Red Hill filling station, which became a Grade II listed building in 2012. The railway also forms the boundary of the southern end of Birstall Golf Club. 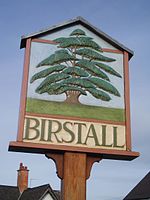 The name Birstall comes from the Old English words indicating the place of a fort - Burhsteall.

Anglo-Saxon remnants have been found in the village and surrounding area. The village was called Burstalle in the Domesday Book when it belonged to Hugh de Grandmesnil.[1] Willard held these lands for Hugh and the 16 acres of meadow and a mill were said to be worth three ounces of gold. The village was a small one until the arrival of the Great Central Railway in 1899. From then onwards development has continued and still continues to-day. Between 1901 and the 2001 the population grew from 611 to over 11,000.