Belleek is a village on the western edge of Fermanagh and indeed it is the westernmost village in the United Kingdom. While the greater part of the village lies within Fermanagh, part of it crosses the border into County Donegal in the Republic of Ireland. The village had a population of 836 people in the 2001 Census.

Belleek is a thriving market town with a variety of pubs, shops, restaurants and a hotel. It is most famous for the fine parian china produced there at the Belleek Pottery, the oldest pottery in Ireland. The china is valued by collectors from all over the world. It is also a noted location for angling and other recreational activities and is now linked to the River Shannon by canal.

The village's name is derived from the Gaelic Béal Leice, meaning "mouth of the flagstones".[1])

The highest temperature in Northern Ireland recorded by the Met Office, 30.8°C, occurred at Knockarevan (near Belleek) in County Fermanagh on June 30, 1976.[2]

In earlier times Neolithic settlers appeared around the town and legend has it that Fionn mac Cumhail's men sharpened their swords on the big limestone rock at Belleek Falls.

A royal castle was built at Caol Uisce near Belleek at the entrance to Lower Lough Erne by Gilbert Costello in 1212. Belleek Town in its present layout was founded on the Blennerhassett estate during the Plantation of Ulster in the early 17th century.

The establishment of the pottery in 1857 saw the start of growth and the town developed further with the founding of a cooperative creamery in 1899, a police station, a courthouse, post office and dispensary. 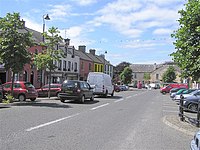