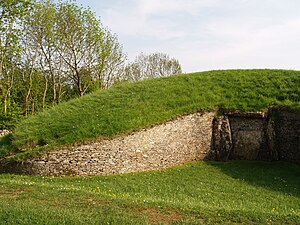 Cleeve Hill stands at the edge of the Cotswolds between Cheltenham and Winchcombe and its broad top, especially on Cleve Common, is scored with several ancient earthworks. Belas Knap is to the east, separated from Cleeve Common by a steep gulley, and on this subsidiary top is found the long barrow. The barrow is a scheduled ancient monument in the care of English Heritage but managed by the council.

The origin of the name ‘Belas Knap’ is unknown. It has been suggested as coming from the Latin word bellus meaning 'beautiful', which could describe the hill or its view, while "Knap" is derived from the Old English for the top, crest, or summit of a hill. While an Anglo-Saxon would add a Latin word is not explained by philologists.

Belas Knap is a type of monument known as the Cotswold Severn Cairn, all of which have a similar trapezoid shape, and are found scattered along the River Severn.[2] Belas Knap is described in the English Heritage designation listing statement as an "outstanding example representing a group of long barrows commonly referred to as the Cotswold-Severn group". 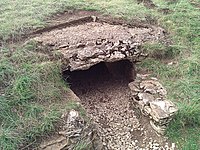 One of three excavated burial chambers 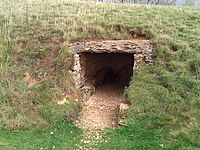 What appears to be the main entrance to the barrow, with intricate dry-stone walling and large limestone jambs and lintels is, in fact, a false one. The actual burial chambers are down the long east and west sides of the barrow and at its southern foot. There are four burial chambers, two on opposite sides near the middle, one at the south-east angle and one at the south end. These are formed of upright stone slabs, linked by dry-stone walling and originally had corbelled roofs.[1] 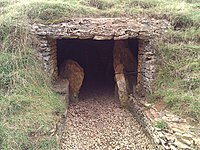 In the 1863-1865 excavations, the skeletal remains of five children, aged between 6 months and 8 years, the skull of a young adult male, horse and pig bones and fragments of pottery and serrated flint blade were found among the rubble blocking the 'false entrance'. The passages leading to the chambers were roughly blocked with stones and clay. The lintels and much of the dry walling were rebuilt on the original lines in 1863-65, when the barrow was first explored. After the 1928-1931 work, the walling was secured, three of the chambers were covered and the contour of the mound was restored. Excavations in 1963 found the remains of 38 human skeletons, together with animal bones, flint implements and pottery of the end of the Neolithic period (New Stone Age), circa 2000 BC. These burials, however, occurred over a long period of time and it may be that none date to the time when the mound was built.[1] 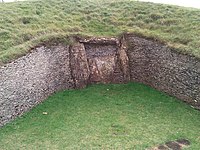 It is accessed by either of two paths. The most well-known is the one from the narrow and steep Charlton Abbots road, south of Winchcombe. There is a 'pull-in' on the left, with a signpost pointing up through the trees to the right. There is a steep climb for the first stretch of the footpath, affording views of Winchcombe, until the rounded hill top is reached. This walk takes approximately 10 minutes. The other is from the 'no through road', which leaves the above road at SP019263, to go up to Corndean Hall. The last part of the drive is on an unsurfaced track, on which vehicular right of way is unclear. This cuts out the steep climb of the other route and approaches the site from the West.