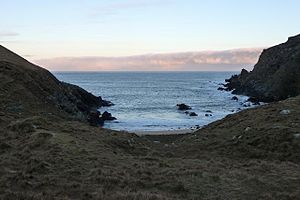 The Bay of Swordly is a small, rock-bound bay on the north coast of Sutherland with a small beach at its head. It is in the Parish of Farr, east of Farr village, which has its own bay, and west of Kirtomy, also with a minor bay of its own.

Just inland of the Bay of Swordly is its eponymous hamlet, Swordly, by a burn which runs into the bay: the Swordly River. The bay provides a sheltered access to the sea from the hamlet.

The Bay in winter
Retrieved from "https://wikishire.co.uk/w/index.php?title=Bay_of_Swordly&oldid=62557"
Category: